By Jennifer Pernicano on August 23, 2018
Advertisement 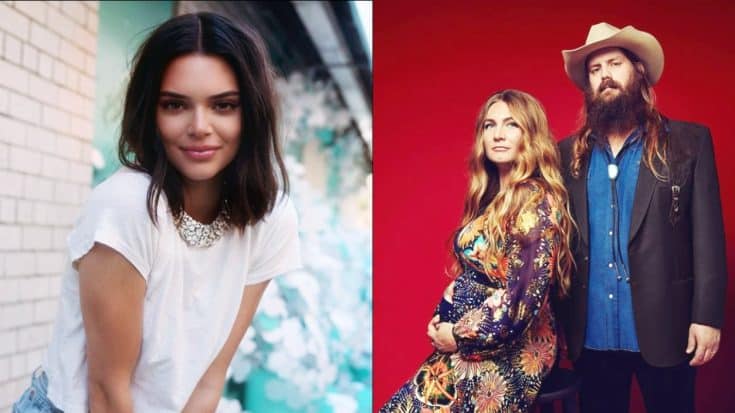 At a Chris Stapleton concert in August 2018, this television personality decided to use social media to call out her crush.

Kendall Jenner, a 23-year-old model and reality star, added a few love notes to her Instagram story while attending Stapleton’s Los Angeles show. In one of her video highlights, we saw her dancing and singing along with Stapleton’s “Fire Away.”

Chris Stapleton has a new fangirl in one of the Kardashians…but what does his wife think? pic.twitter.com/tJJailWte9

We can see that Jenner is definitely a fan – she even knew all the words! Later on in her story, she got a little more excited and wrote, “I love you Chris Stapleton” and “call me.” She might not be getting any direct calls from Stapleton himself – but his wife decided to respond for him.

Luckily, she is one of the coolest country music spouses around. In the calmest way possible, Morgane Stapleton showed zero jealousy and even joked: “?When @kendalljenner loves your husband & wants him to call her, but you also have strong love for said KarJenner…”

Kendall comes from the famous reality TV show Keeping Up With The Kardashians, and is the daughter of Kris Jenner and Caitlyn Jenner.

?When @kendalljenner loves your husband & wants him to call her, but you also have strong love for said KarJenner…

Morgane recently proved her love for the “KarJenner” family runs deep. She shared a photo of herself opening a box from the jean company Good American, which is owned by Khloe Kardashian.

“As a woman with 6 month old twins who is just now getting back into the swing of things, opening anything from @goodamerican is always a good day. Thank you @khloekardashian & @emmagrede for being so thoughtful in your sizing! It’s appreciated more than you know ♥️,” she captioned the post.

I have avoided working out like the plague until this week…As a woman with 6 month old twins who is just now getting back into the swing of things, opening anything from @goodamerican is always a good day. Thank you @khloekardashian & @emmagrede for being so thoughtful in your sizing! It’s appreciated more than you know ♥️

Morgane met Chris in 2003 while working at a neighboring publishing house. The couple considers their first date to be a songwriting session they had a friend set up for them. By 2007 they were married and ready to grow their family. In an interview with NY Times, Stapleton made our hearts melt when he reminded us of what marriage is all about – love.

He talked about his relationship with Morgane saying, “We can lift each other up on bad nights, kind of give each other a wink when we screw up or do something funny.” It is great to see two people love and support each other like the Stapletons do.

It is no surprise, that with that kind of support – Stapleton was able to go from writing behind the scenes to becoming successful on stage. After years of writing songs for legends like George Strait and Kenny Chesney – Stapleton finally decided to create his own album in 2015. Traveller ended up being a hit and put Stapleton on the map, winning him several awards including a Grammy for Best Country Album.

These two have one of the strongest relationships, and you can tell just by the way they look at each other!

Watch them perform together live at the Grand Ole Opry in the video below and tell us your thoughts in the comments!