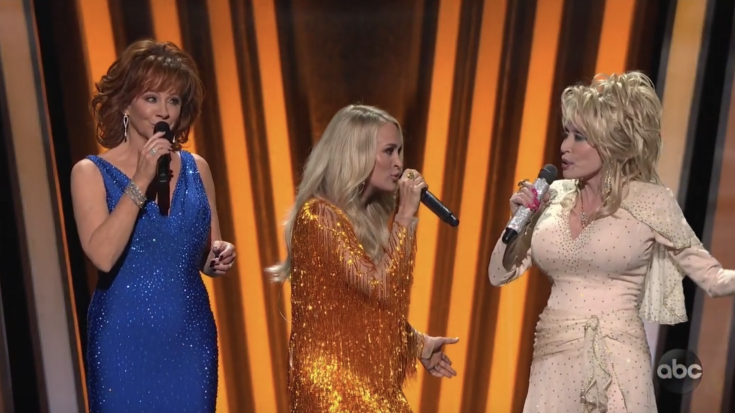 After 11 years of sharing the CMA Awards show stage with Brad Paisley, Carrie Underwood kicked off the country music’s biggest night with the help of two of her idols….Reba McEntire and Dolly Parton. All three women are not only known for their musical abilities, but for their quick wit and humor. So, it’s no surprise that the opening monologue of Wednesday night’s show was full of laughs.

As the hosting trio made their way on stage at Bridgestone Arena during the live broadcast, the crowd erupted, fully aware that they were witnessing history in the making. Together the three hold a combined 14 nominations in the Entertainer of the Year category (both Parton and McEntire won the award in 1978 and 1986 respectively),  they have nearly 80 Number 1 songs between them, and have sold more than 300 million records combined. That’s some serious girl power!

There were jokes about Dolly’s “rack” and about Willie Nelson & Kacey Musgrave’s mutual love of Willie’s Reserve, but there were also heartfelt moments. The trio took the opportunity to thank former host Brad Paisley for allowing them to host together during this history-making year.

Did you hear on the #CMAawards – @CarrieUnderwood, @Reba and @DollyParton are all sharing ONE dressing room that has racks & racks of clothes! ? pic.twitter.com/O8n6EyRlSL

“Thanks to Brad Paisley for stepping back and letting us gals do our thing tonight,” Dolly said before explaining that Brad and his wife weren’t in attendance because they are on vacation. “We miss you. Carrie is missing you a lot, but we told her to suck it up.”

“Yeah, it takes two of us to fill Brad’s boots,” added Reba.

The ladies also gave shout outs to the current Entertainer of the Year nominees, Chris Stapleton, Garth Brooks, Chris Stapleton, Eric Church and Carrie Underwood. They reminded the crowd that both Dolly and Reba previously won the coveted title.

The monologue followed an epic collaboration between 14 female artists whose successes have spanned nearly five decades, from Dolly Parton who signed her first record deal in 1965, to Tanya Tucker who charted her first single “Delta Dawn” in 1972, to the reigning CMA Female Vocalist of the Year, Carrie Underwood. The all-girl group performed iconic country songs in a “monumental decade-spanning medley never before seen.”