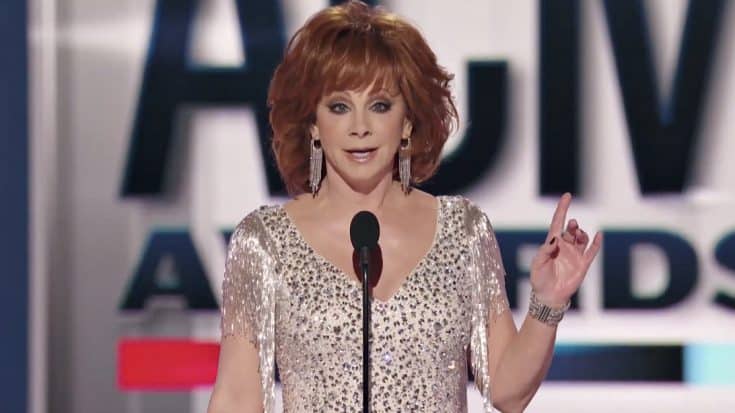 For the 16th time, Reba McEntire hosted the Academy of Country Music Awards Sunday night (April 7). Part of her hosting duties includes kicking off the annual show with a memorable monologue, and as usual, she delivered.

Reba walked onto the stage to a standing ovation at the MGM Grand Garden Arena in Las Vegas before answering the question everyone was asking. “Do you ever get tired of hosting the ACM Awards?”

“Tired of celebrating great artists and music? Tired of amazing live performances? Tired of being in charge of the biggest night in country? Heck no!” Reba exclaimed. “My name is Reba McEntire and I haven’t been tired in 53 years. I’m a woman in the music business and we don’t have time for tired.”

She followed up with a not-so-veiled blow at the ACMs for their lack of female Entertainer of the Year nominees.

“Did you know that it snowed in Las Vegas a few weeks ago? It was so cold it froze us women out of Entertainer of the Year,” Reba said and was met with plenty of “oohs” and “wows.” But, she redeemed herself by saying, “But, you know what? It didn’t bother Kacey Musgraves because she’s been too busy carrying all her Grammys around!”

She then moved on to throw some good-natured jabs at some of her fellow country artists. Maren Morris got a birthday greeting from Reba, but it didn’t come without a joke about her age and her party being held at Chuck E. Cheese.  Jason Aldean and his wife Brittany were teased for having a baby within a year of Jason winning ACM Entertainer of the Year the past two years. “I can just hear Brittany saying, ‘Honey, if you win tonight can we just cuddle?'”

Even Reba’s daughter-in-law Kelly Clarkson wasn’t immune to the harmless jokes. Reba joked about Clarkson’s crazy schedule and numerous jobs, including being a coach on The Voice, an author, a touring singer, and a soon-to-be talk show host.

“They just announced that 200,000 new jobs were created last month. And, yep…Kelly Clarkson got every one of them,” Reba said. “Kelly is one busy woman. She just finished a tour, back on The Voice, a movie coming out, children’s book, a talk show, and just since I started speaking, she’s already knitted a scarf and sketched a picture.”

Reba also called out Blake Shelton who pulled a microphone out of his jacket pocket and offered to help Reba with hosting duties. When she kindly declined, Blake pulled out a yard-long glass of beer and said, “Fine. Forget you, Reba.”

Watch Reba’s hilarious opening monologue for the 54th Academy of Country Music Awards in the video below.