By Jennifer Pernicano on February 27, 2019
Advertisement 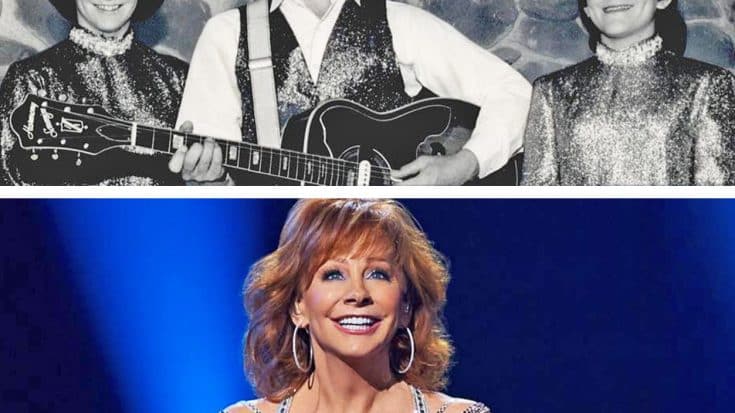 It’s no question that our favorite redheaded beauty embodies endless talent but did you know it’s been her calling for decades? Reba McEntire just shared the most adorable throwback proving that talent runs deep. But before she was just Reba – she had some familiar faces joining her on stage.

That’s a wrap on the best 90 minute show that takes over two hours. See ya’ all next year!

Reba was born in McAlester, Oklahoma where her passion for music came to life. While growing up alongside her older brother Pake and younger sister Susie, they formed the vocal group The Singing McEntires. Reba took the reigns by writing all of the songs and playing guitar for the group – as she had taught herself at a young age. Eventually, the group began singing at rodeos, clubs, and dance halls promoting their talent.

Reminiscing on her younger years, Reba took to Instagram to share a photo of The Singing McEntires from the early 1970s. Standing in front of the family’s fireplace, the siblings are dressed to the nines. Reba and Susie are wearing white go-go boots with long-sleeved sparkly dresses. Pake, who stands tall in the middle, is matching the girls with this sparkly vest.

July 18, 1971 photograph used for a story in the Daily Oklahoman newspaper. Caption: "In growing demand as entertainers are the Singing McEntires of Limestone Gap." This photograph is part of the collection entitled: Oklahoma Publishing Company Photography Collection and was provided by Oklahoma Historical Society to The Gateway to Oklahoma History, a digital repository hosted by the UNT Libraries. Limestone Gap is not exactly Coal County, but close [email protected] @susieqmaceaton #singingmcentires

Reba told the story behind this photo explaining that it was a photograph from July 18, 1971, for the Daily Oklahoman Newspaper. The caption read,

“In growing demand as entertainers are the Singing McEntires of Limestone Gap.”

Clearly, not much has changed as Reba still loves her sparkly dresses and is highly recognized for her talent. It’s humbling looking back at this photo when the icon had no idea the impact she would soon make on the country music world.

On May 10, 1995, I took home the awards for Top Female Vocalist and Entertainer of the Year at the 30th @acmawards…one of the highlights of my career! Thanks ACM for all the love and support over the years. #tbt #throwbackthursday #reba #countrymusic

Fast forward to today and Reba has been named as one of the best selling artists of all time – selling more than 75 million records worldwide. With 29 studio albums, 42 number one singles, and 16 number one albums under her belt, it’s no wonder she’ll forever go down as one of Nashville’s most beloved stars.