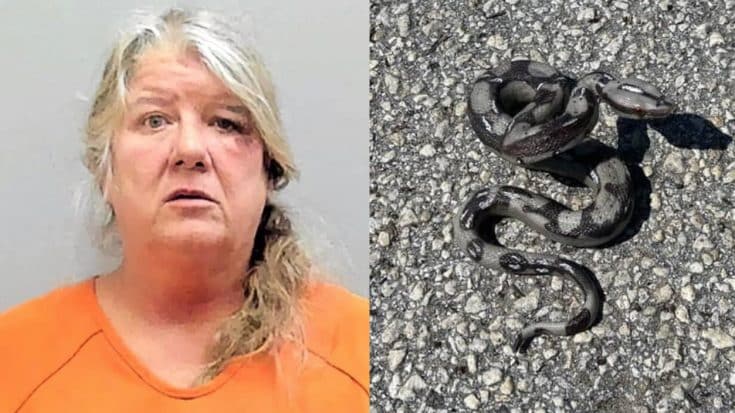 According to the Martin Country Sheriff’s Office, 54-year-old Dawn LaShawn Laprade of Vero Beach, Florida is facing multiple charges of aggravated assault on a police officer, as well as fleeing and eluding, after an incident that took place this past week.

The Sheriff’s Office said Laprade was driving 80-100 miles per hour when she intentionally tried to run down an officer driving a motorcycle. Luckily, the officer was able to jump off his bike before being struck by the lady.

The office wrote on Facebook, “She was located by two other road units heading into Indiantown. While driving, she motioned to the deputies that she had a gun, and drove erratically trying to cause them to crash.”

Police said she smashed into one patrol car and continued on causing a rollover crash of a pick-up truck with three people inside it. Deputies were finally able to stop her and when they approached the vehicle, she threw a snake on the officer, causing him to deploy his taser on her.

“She was taken into custody. Afterwards, deputy located that snake and found it to be rubber,” the office wrote on Facebook.

“Dawn Laprade was charged with four counts of aggravated assault on a police officer, fleeing and eluding. Her bond is $90,000 and additional charges are possible,” they said.

The three people involved in the crash were transported to the hospital where they were treated for non-life-threatening injuries. No deputies were injured during the incident.

View The Offical Statement Below