By Manly Bryant on January 28, 2021
Advertisement 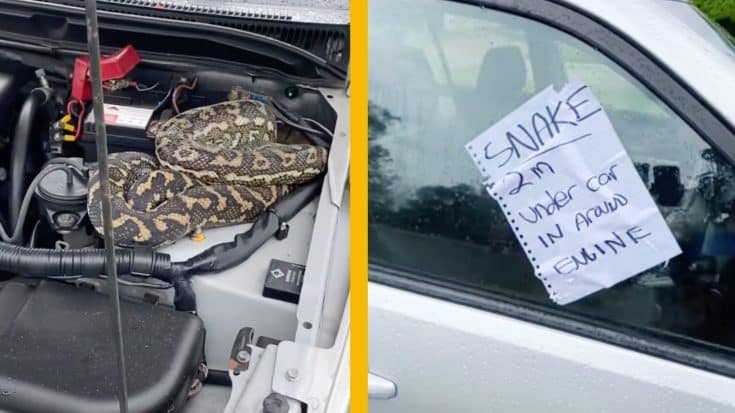 One Australian resident received a 6.5-foot surprise under their car hood.

While a friendly neighbor had attempted to warn the car owner about the snake with handwritten notes, the resident initially believed that the warnings were merely a “sick prank.” Still, Stuart McKenzie, owner of Sunshine Coast Snake Catchers 24/7, was called to the scene. In a Facebook video, McKenzie states:

“It’s pretty convincing that there must be a snake there. Hopefully, it’s not a prank because that’s pretty mean.”

In the video footage, McKenzie pops the car’s hood and immediately spots a large python coiled inside. After McKenzie removed the snake and placed the python into a protective bag, his team transported the non-venomous species to a safe area of bushland.

“It just shows, it’s great to have good neighbors because they had written those notes and let her know that there was a decent-sized carpet python in her engine bay,” McKenzie remarked in the video. “And it’s lucky that they told her because if she had taken off, it could have injured the snake, that probably would have damaged her car.”

For more facts on pythons, check out the next video.