Returning From Deployment, Army Dad Hides In Box From 4-Year-Old-Son 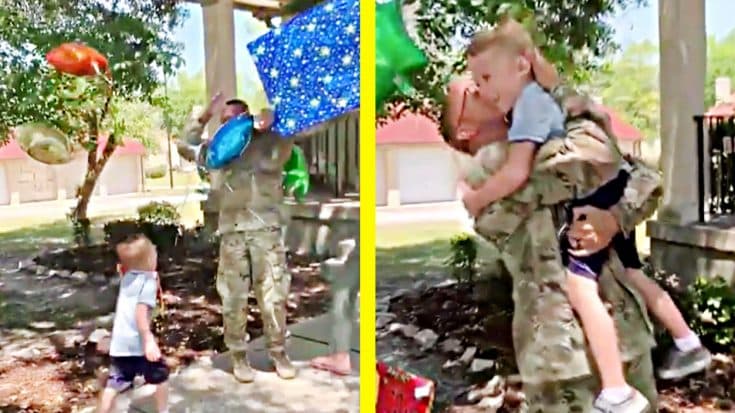 On Mother’s Day (May 10, 2020) in Michigan, U.S. Army Specialist Eian Harris and his wife, Taylor, had a very special surprise for their 4-year-old son Zaiden.

Harris had been serving in the Middle East for the past five months after being deployed with only a days notice before he was ordered to leave.

Harris and Taylor planned a surprise for their son Zaiden with his homecoming. Taylor told their son that unfortunately, his dad would not be able to make it home, however, the Army had sent him a package to make it up to him.

On the sidewalk of their front yard stood a tall box, wrapped in sparkly blue wrapping paper, adorned with yellow stars and a big yellow bow. As Zaiden stood in front of the gift, unsure what to do, his mom asked him if he wanted her to lift it up. Zaiden responded, “Yea, are you strong?” He seemed worried the box would be too heavy for his mom to lift.

As Taylor slowly lifted the box, you could see Army boots and legs dressed in an Army uniform. Metallic star balloons started to float out of the box when suddenly his dad appeared! Zaiden shrieked in excitement, “Daddy!” and he ran over to him and clutched his legs. Harris scooped up his son and hugged him tightly, both incredibly happy to be back in each other’s arms.

In an interview with Fox 2 News Detroit  Zaiden told the interviewer he felt like he was dreaming when he saw his dad and thought he was invisible and not home. He was definitely surprised and said what he looked forward to most now that his dad was back was, “We get to be a family now.”

Watch the heartwarming story below.