By Manly Bryant on November 13, 2019
Advertisement 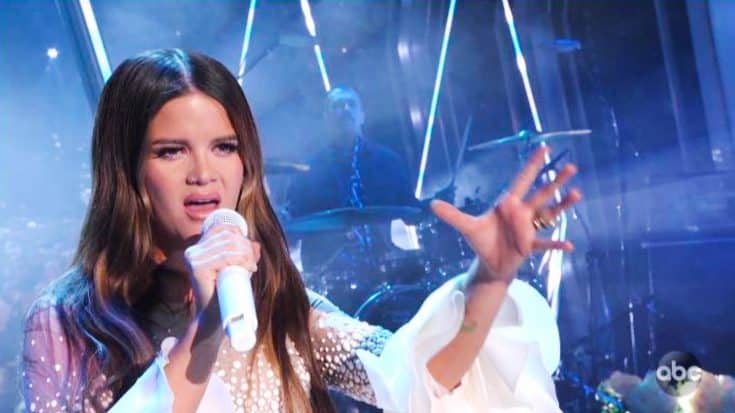 Standing out in a crisp white dress and decked out to the nines, Maren Morris showed the 2019 CMA Awards just how big her voice is – and during an evening meant to call attention to female voices in country music, she picked the best song choice.

"The fans make it all happen." Make no mistake, even though @MarenMorris received recognition from her peers with her #CMAawards nominations, the country star tells @abc7george she still does it all for the fans. #MarenMorris pic.twitter.com/DTQxdFQSgD

Just a few short weeks after making the public announcement that she and husband Ryan Hurd were expecting their first child, Maren Morris took to the stage for a thrilling performance during the biggest night in country music.

With the most nominations tonight, @MarenMorris is performing her hit GIRL right now on #CMAawards! Turn on @ABCNetwork so you don't miss it pic.twitter.com/NoXOOLcSvu

Morris, who is known for her chart-topping hits “My Church,” “80s Mercedes,” “The Middle,” and “GIRL” has become one of the best-known names in modern country with her meteoric rise to stardom over the last 3 years.

The glowing expectant mother truly shined in this riveting performance of her hit song “GIRL” surrounded by mirrored panes and a sea of white flowers.

Watch her full performance below and let us know what you think in the comments.