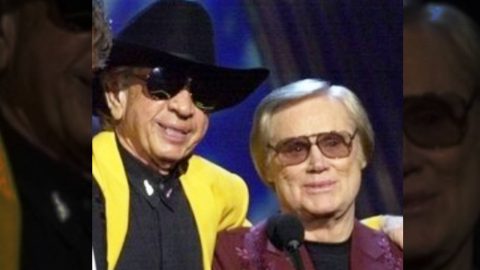 After a four-decade career as an entertainer, it’s no surprise that there are more than a few epic stories about George Jones that have yet to be told. Well now, years after his death, we are hearing some of those stories thanks to country singer Justin Moore’s podcast.

We’ve always known George Jones was a badass when it came t0, well…anything. But now we know about a few more reasons as to why.

When Tracy Lawrence stopped by Moore’s podcast over the summer, the “Time Marches On” singer revealed that Jones was known for a certain “prank” that made his friends bow down to him.

Lawrence said, “I learned real quick not to get to close to him because George, if you were walking beside him, especially if you were on right his side, you would be walking along everything fine having a conversation, he would just take his hand and he would backhand you right down the cod and he would say, ‘take a bow son.’ I mean, it double you over right there in hall, man. And he’d just laugh. So you learned to kind of guard yourself when you was close to him because he’d catch you off guard and pop you boy.”

But an even more badass George Jones story came during the November 5th episode with country duo LOCASH.

Preston Brust began telling a story of a time back in the day when Jones’s wife Nancy called him and said George wanted them to join him at a show and to be at the airport soon. Brust called his bandmate Chris Lucas to let him know.

When they arrived at the airport, they saw two private jets and were skeptical because they hadn’t been on the scene very long.

“I didn’t even have a Rapid Rewards number with Southwest!” Brust joked.

Then, all of a sudden, out walked John Anderson, Tracy Lawrence, Lorrie Morgan, and George Jones. Yep, turns out they were in the right place. They hopped on the plane filled with country legends and were treated to stories from them all, including Jones’ biggest regret of turning down a collaboration with Frank Sinatra!

One story Jones told was about when he was coming up in his career and touring with Buck Owens. He got to the point where he felt he was ready to be the headliner and asked Owens if he could go one after him. Owens said no. Night after night, Jones would go to Owens’ trailer to ask him if he could headline, but the answer was always the same.

Moore, a headlining act himself, noted that something like this would “never happen” nowadays.

The “I Love This Life” singers said that one night, Jones had had enough. He knew he was ready to be the headlining act, despite what Owens said. So after yet another rejection from Owens, Jones went back to his bus and learned all of the “I’ve Got A Tiger By The Tail” singer’s songs.

Instead of going out and playing his own music, Jones played “the entire Buck Owens set, top to bottom.”

Brust said Jones told them, “If I can’t close the show, then I’m gonna sing all your songs…and that there was the last show I ever did with Buck Owens.”

Apparently this wasn’t the last time Jones pulled this stunt. After being quiet for a little bit, he said, “Same thing happened with Elvis Presley; I never did a show after that either.”

If anyone else did something like this, they’d likely be blacklisted from Nashville, but not George Jones! Listen to LOCASH tell the story below.

Buck and George weren’t on the outs for very long. The two teamed up in 1991 for a duet to “Love’s Gonna Live Here,” which Buck first released in 1963. Jones dropped a cover version one year later. Listen to their duet below.