Robot Vacuum Runs Over Dog Doo And Smears It Everywhere 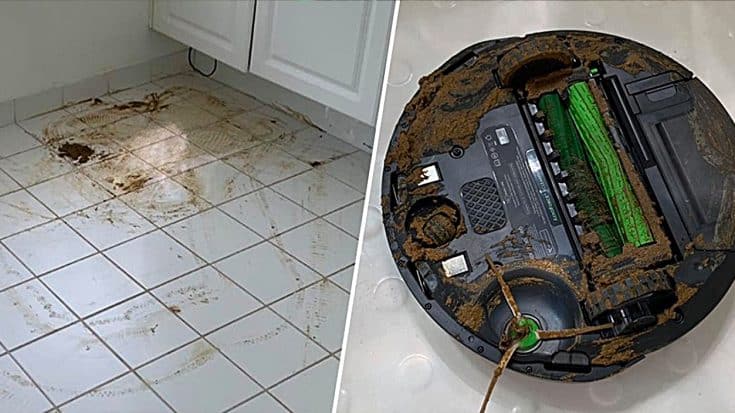 We’ve all seen those “smart” robotic vacuums on late night TV commercials sweeping up the living room floor on its own. It looks super cool and makes you want to get one so you don’t have to vacuum yourself, that is until you hear about it smearing dog poop all over the house.

Warning: some may find the language below offensive.

My new Roomba ran over my dog’s shit and proceeded to “clean” the rest of my house. I’m going to need therapy.Go follow my movie Instagram: @rylanfilms I follow back!!

Unfortunately for Randy Landy, he left his Roomba running while he was away and it ran over a big, smelly pile of dog doo-doo and tracked it all over the bathroom floor. By the time Ryan walked into the bathroom, it was too late, the Roomba completely covered the place with the mess.

Ryan wrote on Facebook, “My new Roomba ran over my dog’s sh*t and proceeded to “clean” the rest of my house. I’m going to need therapy.”

Ryan posted the pictures of the incident on July 14th, 2019 and since then, at the time of publication, it has been shared over 21 thousand times with 21 thousand comments. It went super viral to his surprise and he later followed up with another post showing the pup who did the dirty deed.

The Dog Who Did It

Due to popular demand, here’s the shitter!Also for those wondering, we rescued him recently and he’s not fully trained…

Apparently, everyone wanted to know what the dog looked like so Randy posted the picture of his pet saying “Due to popular demand, here’s the sh*tter!”

Hilarious story, but unfortunately (or maybe fortunately) there is no video to go with it. However, we did find a video on YouTube showing a similar situation to this.

Watch the video below showing a Roomba spreading dog poop.