By Miranda Raye on October 12, 2018
Advertisement 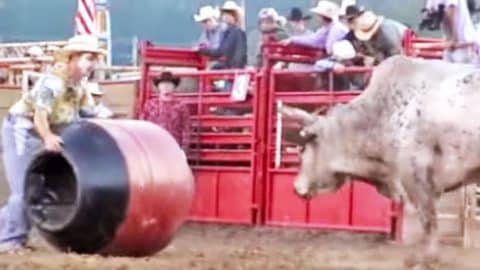 Anyone who competes in rodeo events has to have nerves of steel. Since animals are so unpredictable, the competitors have to be on their toes at all times.

Bull riding has earned the reputation as one of the most dangerous rodeo sports. At least in the U.S., a bull rider’s goal is to remain on the bull for a total of eight seconds. If the bull bucks them off before then, their ride does not qualify.

Once the rider falls of the bull, he or she needs to hurry to get out of harm’s way. The angry bull could easily crush the rider if they don’t make it to safety fast enough.

That’s where the rodeo clown comes in.

During the early days of rodeo, the rodeo clown was also a bullfighter, and it was their responsibility to protect the riders in addition to providing comedy and entertainment for the crowd.

While most professional rodeo shows now assign two bullfighters to the sole job of protecting the competitors, some rodeo clowns also serve the same role. These rodeo clowns distract the bulls in various ways so that the riders can get out unharmed.

Ohio native Craig Miller served as a bullfighter for 12 years before he switched into his role as a rodeo clown. But when he isn’t busy entertaining the crowd, Miller still jumps into the arena to help protect the riders.

A video captured during a rodeo in 2011 shows Miller engaging in an epic showdown with one angry bull.

The rider managed to stay on the bull for a few seconds before he was tossed off. That’s when the bullfighters came to his aid, and managed to help him break free from the bull.

Once the bullfighters got the rider out, Miller came in to help calm him down. Walking toward the bull with a giant barrel, Miller remained fearless even when the animal lunged at him a couple of times. Miller just stared the bull down, proving to him that he was the boss of the situation.

Scroll down below to catch the video of Miller in action. He’s got some nerve!