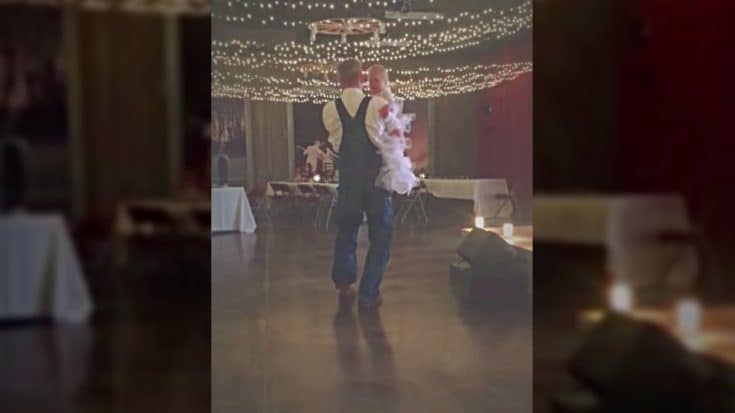 On the two-year anniversary of Joey Feek’s passing, her husband, Rory, wrote a blog post that served as his source of reflection.

In that blog, Rory noted how it was kind of strange to think that Joey had been gone half as long as their little girl, Indy, had been alive. Rory said that then-four-year-old Indy was growing fast.

“Indy turned four-years-old…and she’s walking and talking so well and is so kind and so sweet…I think Joey would be so proud,” he wrote.

Turning Indy Into A Little-Bitty Bride

Ever since Indy was born, Joey + Rory‘s fans have treasured every photo and video that Rory shares of her. Since Joey passed, fans have found a source of comfort in hearing updates about Indy and seeing her smiling face in photos.

So you can imagine the overwhelming feeling of joy fans felt when Rory published a new blog in May 2018, and it was quite Indy-centric.

As Rory wrote, his niece, Rachel, had her wedding reception at the barn on his property. The reception made him think of his middle daughter, Hopie, who loved wearing an old wedding dress when she was a little girl. That made him think of something he could do for Indy:

“I can still remember seeing [Hopie] riding her bike all around the apartment complex we lived in day-after-day, wearing the wedding dress. It was quite a site. So I thought it would be special to find a little wedding dress for Indy to wear to surprise Rachel.”

Rory said that Indy was beyond excited to be wearing her pretty dress to the reception. While he is pretty sure she doesn’t know what a wedding reception is, he said that she did know that she felt “bootiful.”

Just as Rory hoped, Indy’s wedding dress was a big hit with the guests, and with Rachel. “[Indy] spent most of the evening twirling and dancing and shaking people’s hands and hugging people she didn’t know and a few she did,” he wrote.

But the fairytale night eventually had to end, as it was far past Indy’s bedtime by the time people started to clear out of the reception.

Before they left to head back home, Rory took the chance to enjoy a special moment with Indy. Holding his baby girl in his arms, Rory began to dance to an old Keith Whitley song titled “I’m Over You.”

The song is especially significant to Rory, since it’s one that he and Joey used to dance to. He wrote about his special dance with Indy to the song, and the way he described it is absolutely precious:

“And although Dalton got the first dance with the bride…I got the last dance with her. Well, with my little-bitty bride that is. It was to an old Keith Whitley song that her Mama and I used to dance to.”

You’ll be happy to hear that Rory also shared a video of his dance with Indy. You can watch it below. It has to be the sweetest thing you’ve seen in ages!