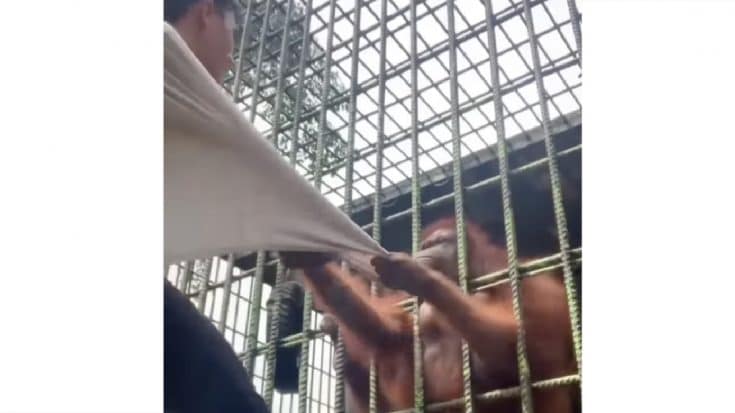 A zoo visitor learned the hard way why warnings are posted around animal cages after he climbed a fence and got a little too close to an orangutan cage.

A video captured by a fellow visitor at an Indonesian zoo shows a feisty orangutan reach through the bars of his cage and grab 19-year-old Hasanal Arifin by his t-shirt. Another individual is seen coming to the man’s aid as he tries to pull away, but it appears to only make the orangutan more angry.

The ape lets go of the man’s shirt only to grab his leg in his fierce grib. Somehow the man ends up sideways against the cage as the orangutan holds tight and the man yells in fear. He was eventually freed, but not before the ape attempts to bite his foot.

According to an Indonesian website, the visitor violated the zoo’s safety rules by climbing over a safety barrier in order to get a video. The zoo’s manager told reporters the orangutan may have been provoked by the visitor before the now-viral video was filmed.

“The visitor wanted to take a video [and] create content without permission,” an angry zookeeper identified named Ides told Newsflare. “He crossed the safety distance barrier. This is very dangerous and violates the rules. We have already reprimanded the man. Please take the rules seriously…This was idiotic, stupid behavior. It also put himself and others in great danger. I have reminded staff to ensure that no visitors have the chance to do this again.”

Following the incident going viral, the zoo issued an apology on Instagram and shared videos to show how the man broke the law. They also requested that visitors follow stated zoo rules and “be mindful of their actions when visiting the zoo.”

The India Times reported that “orangutan’s are generally nonaggressive towards humans, however, they are considered to be five to seven times stronger than humans.”

Watch the terrifying incident in the video below.