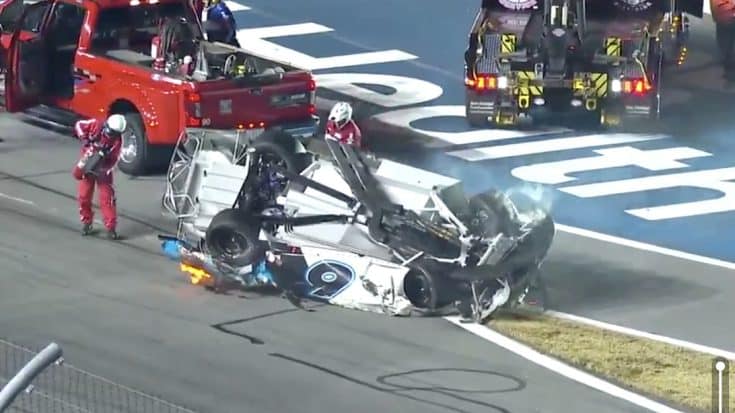 It was a frightening conclusion to the Daytona 500 Monday (February 17) as a horrific crash sent NASCAR driver Ryan Newman to the hospital. The crash took place during the final lap of the 500 mile race as Newman was fighting Denny Hamlin and Ryan Blaney for the lead.

Footage of the crash shows Newman in the lead before his car was clipped by Ryan Blaney, sending it into the outside wall. Newman’s car went airborne and landed upside-down before the driver’s side door was hit at full speed by Corey LaJoie’s car. Newman’s car was in flames at it slid several hundred feet on it’s roof.

Emergency personnel rushed to Newman’s car and turned it back onto its wheels. It took them approximately 10 minutes to get Newman out of the car.  He was transported by ambulance to a local hospital. His condition is unclear at this time.

This was a somber end to a race that was postponed Sunday due to rain. It was only the second rain postponement in 62 years.

“I think we take for granted sometimes how safe the cars are and number one, we are praying for Ryan,” winner Denny Hamlin said.

Runner-up Blaney told media that he moved in behind Newman to “push him into the lead,” but the result wasn’t what he had hoped for.

“We pushed Newman there to the lead and then we got a push from the 11…I was committed to just pushing him to the win and having a Ford win it and got the bumpers hooked up wrong. It looked bad,” he said.

NASCAR provided an update on Ryan Newman’s condition and read a statement from his family saying:

“Ryan Newman is being treated at Halifax Medical Center. He’s in serious condition, but doctors have indicated that his injuries are non-life-threatening.”

The family asked for privacy during this time, but expressed their appreciation for fans’ “patience and cooperation.”

Our thoughts and prayers are with Ryan Newman and his family at this time.

See footage of the frightening crash below.