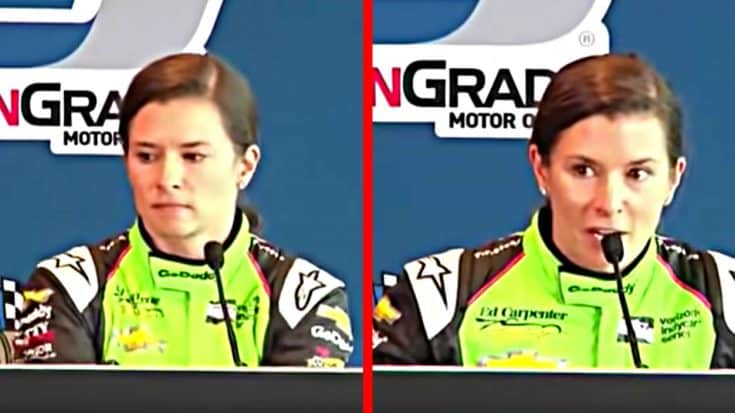 The most disappointing way to end her career was exactly what happened during Sunday’s Indy 500 and, expectedly, she was not pleased about it.

Danica Patrick‘s career had been plagued with untimely and unfortunate crashes, immense highlights and accomplishments, and has drawn great criticism from many people. After tearfully announcing her retirement from motorsports, Danica explained that she was going to go out with a bang – participating in two of the biggest races all year: NASCAR‘s Daytona 500 and IndyCar’s Indy 500.

Danica Patrick’s driving career has just ended in disappointment as she crashes out of the Indy 500 on Lap 68.

Having already placed high in the Indy 500 qualifying rounds – and starting off in seventh during the race, her car got loose on the 68th lap and sent her flying into the outer wall on turn two.

Danica Patrick's last race ended with a crash at the Indy 500. https://t.co/zFlcoqi4hE pic.twitter.com/kUDfqHFET2

Cameras captured her visibly-distraught mother as she watched from the sidelines while her daughter’s career came to an end that nobody wanted to see.

Walking out on the media floor, she expressed her deep sadness about how her final race had ended…but that was just the beginning of the interview.

Danica Patrick visits the fourth floor of the media center for a final interview. “I don’t really want to be here, because I’m pretty sad,” she says.

As Danica walked out and sat down, the microphones hadn’t even been turned on for her. She looked frustrated as she moved to another seat and opened with a sharp sentence that clearly showed the heartbreak she felt over how her final race had ended.

Her face washed with sadness and upset as she discussed her career’s final moments. During her speech, however, she got cut off mid-sentence when the race announcers came over the loudspeaker and her mic was cut off.

“Is that like the Oscars when you’re supposed to shut up and they play the music? No? Took my mic away even.”

“Take my mic away?  I’ll leave! I promise. Like I don’t even want to be here ’cause I’m pretty sad.“

With that, the crowd of media personnel lamented the idea with an audible “No” coming from them before the crew fixed up her microphone situation and allowed her to continue talking.

Watch her full interview below and let us know what you think in the comments.