Sadie Robertson Jumps Out Of Plane To Make Massive Announcement

By Jennifer Pernicano on June 19, 2018
Advertisement 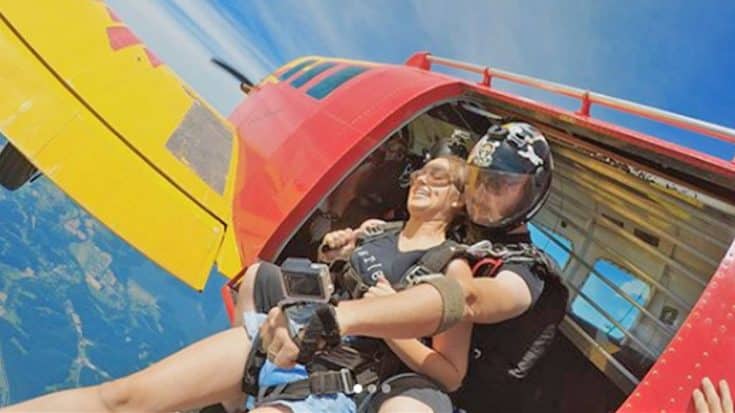 Some people simply write something on social media to make a big announcement. Not Duck Dynasty star Sadie Robertson!

Last week, the reality star took to Instagram to reveal that she had gone skydiving, and shared just a few photos from her experience. She then assured fans that a video would be coming soon.

when your chins say no, but your heart says yes you just gotta trust the wind will take care of your chins. [ don’t worry full video is coming soon? ]

Not long after Sadie shared these photos, we learned that she didn’t act alone – she took her mom, Korie, along for the ride! Korie detailed her experience in a series of photos also shared to Instagram.

A short picture story of skydiving with @legitsadierob for her birthday ? 1- I think they’re trying to scare us. Do we need a helmet? Im not nervous, are you nervous? 2- Lets do this! ?? 3- Ahhhh! I’m jumping out of an airplane! ✈️ 4- it’s a beautiful day to fly! ? 5- We did it! So much fun! Who wants to go again! ?????? I love you, Sadie! I’ll jump out of the sky with you anytime. Love watching you #livefearless #skydiving ?

Well, the wait for their skydiving video is finally over and we can live vicariously through the mother-daughter duo who took their bond to new heights – literally! We saw Sadie’s journey from getting on the airplane, taking off, looking a bit nervous once she was up there, to jumping out of the plane, and marveling at the Earth’s beauty while she was descending.

Once she reached the ground, she shouted with excitement and then ran to find the camera to make a HUGE announcement.

“I just fell out of the sky and it was the best day of my whole entire life, but this fall, I’m comin’ to you – Live Original 2018,” she said. “It’s gonna be unreal. We have Mosaic MSC, Social Club Misfits, myself, my brother John Luke. United we stand, divided we fall….literally out of the sky!”

After jumping out of a plane, she announced her new tour!  When going to her website, LiveOriginal.com, it looks like “United We Stand, Divided We Fall” is the theme of her fall tour. Tour dates and locations have yet to be announced, but you can sign up to get on the pre-sale list here.

This will be Sadie’s third consecutive year going on her Live Original Tour – and each seems to be better than the last, so you’re not going to want to miss this one!

Watch her jump out of a plane – then make her huge announcement in the video below!

WAIT TILL THE END — The tour is back & we couldn’t be more excited! Check this video out & get pumped because we want you to join us. Get on the list to be the first to receive dates & tickets! swipe up on my story to sign up! @mosaicmsc @socialclubmisfits WHO IS COMING OUT WITH US??