Sadie Robertson Just Fed 30,000 Children – Here’s How She Did It

By Manly Bryant on April 22, 2019
Advertisement 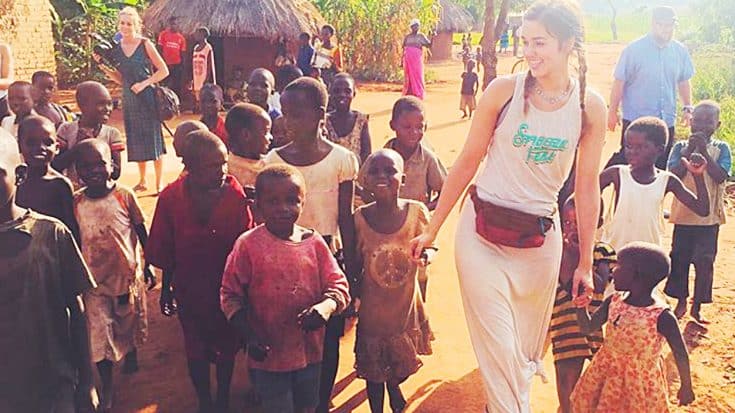 Duck Dynasty‘s sweetheart, Sadie Robertson has been showcasing how big her heart his since we met her on the first season of the popular series. The 21-year-old has found a voice preaching the word of God, meanwhile maintaining a close-knit relationship with her family, friends, and boyfriend. While her preaching has touched the hearts of young adults across the nation, her latest achievement went far beyond America.

Sadie has held a strong faith since she was young but her recent calling has pulled her to begin preaching the word of God to others. In 2014, she wrote her first New York Times bestseller book, Live Original which was inspired by her faith and Christian values. The book title soon became Robertson’s motto in life, as her father, Willie, raised her to not conform to the ways of the world.

I’ve seen you MOVE!!! you’re MOVING MOUNTAINS … and we have seen you do it AGAIN & AGAIN & AGAIN & AGAIN! Wow! This first weekend has blown my mind and expectations. I’m so thankful for every person who came out this weekend and really sought after the Lord, because it was the coolest thing to see Him answer. I have to say though… you never know how good a tour is really going to be until you meet all of the people and see the hearts of the ones who are going out. Mosiac and Social Club y’all are some of the most genuine real people out there. My faith has been strengthened by seeing y’all pour your hearts out each night and lead people to an encounter! Thankful for y’all being ALL IN. It is so seen and it’s so appreciated. I’m overwhelmed. This weekend we will be in PEORIA, IL BOURBONNAIS, IL ST. LOUIS, MO RODGERS, AR come out and be a part – tickets at LiveOriginal.com ‼️‼️‼️‼️ ps – bella rob you are killing these pics @bellarobb

She has since gone on to tour across the country, stopping at churches and universities with a message in her heart. Her upbeat spirit and attitude has brought light to even the darkest of places, so much so that she just managed to help raise over 30,000 meals for children in Africa.

Sadie has gone on multiple mission trips in third-world countries including Guatemala, Haiti, and Somalia. She has built strong relationships with members of the communities as well as became a mentor and leader for the young children.

sharing joy + love today with @romaboots ❤️ i love how a pair of boots can bring so much joy and life change for a child. this clip is from our trip to guatemala last fall (full video on my youtube). today we're celebrating @romaboots and everything they do. use my code SADIE for 50 percent off your purchase. for every pair of boost purchased, one pair is donated. share the love and spread joy friends. #givingpovertytheboot

Her main goal is in hopes to reach #ZeroHunger for these countries as she works together with ShareTheMeal to feed hungry children.

Just a couple hours before Easter (April 21), Sadie announced that over 30,000 meals had been shared. She reached out to her followers in hopes that they could make it 40,000 meals before Easter Sunday. It was all through the incredible help of ShareTheMeal and citizens across the world with smartphones.

HEYY HOOO!! Wow, over 30,000 meals have been shared on my team! This is REALLY incredible! Let’s reach our goal of 40,000 meals before Easter. ? Together, let's help feed hungry children with just a tap on our phones. A super simple way to make a HUGE impact! We can be the generation that reaches #ZeroHunger guys! Go to my story and SWIPE UP‼️⭐️

The way the charity app works is that it allows you to feed a child with just a tap on your screen. For just $0.50, you can feed a child for one day. According to their site, “there are 20 times as many smartphone users as hungry children.” That means, if we can all make this small donation, we could save several humans from starvation.

It’s a truly beautiful way to give back and luckily, Sadie is using her spirit, voice, and heart to help.

You can help out too but following this link to their website.

You can listen to her first-ever gospel song as well below.