By Manly Bryant on December 10, 2018
Advertisement 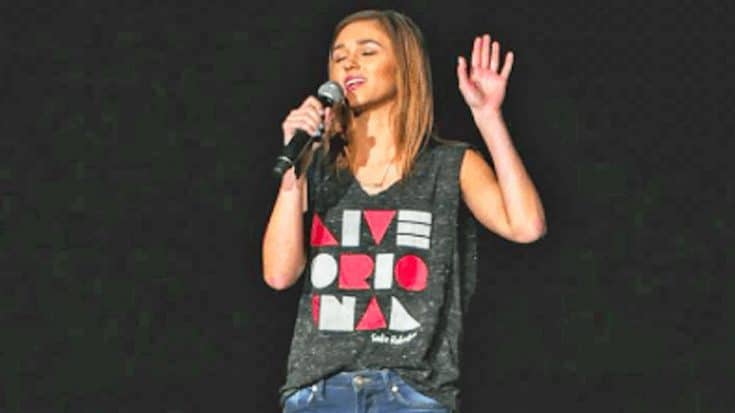 One member of the Duck Dynasty family took a leap of faith and brightened her career with a new gospel song. Sadie Robertson is doing big things in the Christian world at just age 21 with plans to touch the hearts of young adults everywhere.

tomorrow is the last night of tour…. I’m not crying…. you’re crying… okay I’m crying. good thing we get to do this for eternity. tomorrow we are having testimony day for devo and sharing stories from this tour. leave in the comments any stories or testimonies of what God did on an LO night in your heart.? don’t forget to be watching the recap videos today on @liveoriginal !

Robertson has held a strong faith since she was young but her recent calling has pulled her to begin preaching the word of God to others. In 2014, she wrote her first New York Times bestseller book, Live Original which was inspired by her faith and Christian values. The book title soon became Robertson’s motto in life, as her father, Willie, raised her to not conform to the ways of the world.

In 2017, the young Robertson announced her 16-city Live Original fall tour. Her hope was to encourage young adults across the country to follow the word of God and “be the person who [He] truly made you be.” Robertson’s older brother, John Luke tagged along as well as several other incredible Christian artists and speakers. Robertson’s main focus reached out to the millennial generation to talk about the endless distractions that can separate young adults from God’s teachings.

I’ve seen you MOVE!!! you’re MOVING MOUNTAINS … and we have seen you do it AGAIN & AGAIN & AGAIN & AGAIN! Wow! This first weekend has blown my mind and expectations. I’m so thankful for every person who came out this weekend and really sought after the Lord, because it was the coolest thing to see Him answer. I have to say though… you never know how good a tour is really going to be until you meet all of the people and see the hearts of the ones who are going out. Mosiac and Social Club y’all are some of the most genuine real people out there. My faith has been strengthened by seeing y’all pour your hearts out each night and lead people to an encounter! Thankful for y’all being ALL IN. It is so seen and it’s so appreciated. I’m overwhelmed. This weekend we will be in PEORIA, IL BOURBONNAIS, IL ST. LOUIS, MO RODGERS, AR come out and be a part – tickets at LiveOriginal.com ‼️‼️‼️‼️ ps – bella rob you are killing these pics @bellarobb

While on tour, Robertson was inspired to write her first-ever gospel song, “One.”

“My heart for this generation is that we would be united as ONE family. While I was on tour, I wanted to end the night with something that brought everyone together. So I took a leap of faith and wrote this song.”

Fam … my very first worship song is officially out – ONE ! ONLY GOD. I hope when you listen to this song you are met with more of an understanding of His heart for you. This song is for everyone. The lyric video is on my YouTube channel. Link in BIO ? May His love for you be heard and felt. The making of the song video will be posted tomorrow! HUGE shout out and thank you to @hankbentley for making this come to life. You’re a legend!

In her behind the scenes video of making the song, Robertson joked about her trouble recording the song. As the young preacher admitted she is great at worship, she wasn’t used to the process of recording and singing her own tune. Nonetheless, Robertson’s finished product was a stunning gospel song that she was able to share with the audience while on tour.

Robertson’s powerful lyrics will bring hope to your heart with every verse.

Listen to Sadie Robertson’s new worship song “One” below.