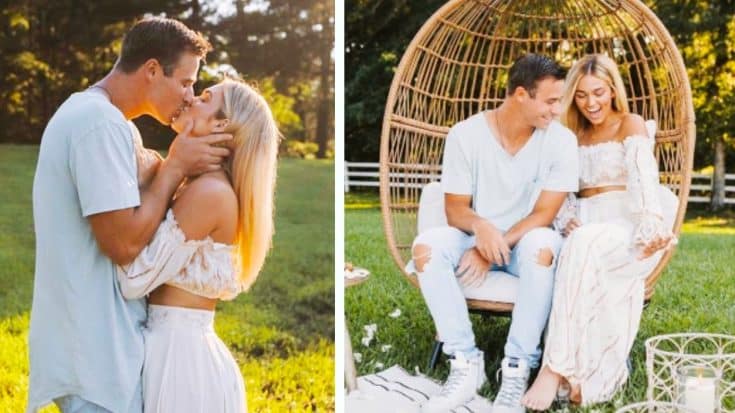 Sadie Robertson knew this past weekend was going to be a weekend of celebration. The young Duck Dynasty star and her boyfriend, Christian Huff, have birthdays within days of each other (Sadie’s is on the 11th, Christian’s is on the 8th), so they were going to spend the weekend celebrating.

But little did Sadie know that they’d also celebrate their engagement that weekend!

Christian surprised Sadie with a romantic setup out on a farm, and had a videographer waiting to capture his proposal on film. Every little piece of the proposal was documented, including Sadie’s stunned response.

Soon after the couple got engaged, their family members began sharing photos to celebrate. Sadie’s sisters Bella and Rebecca filled their Instagrams and Instagram Stories with pictures of a happy Sadie and her gorgeous ring.

Sadie’s mom Korie shared an overjoyed post and a series of photos on her own Instagram. Calling the day “an absolute dream,” Korie gushed about her future son-in-law, saying he is “the most amazing man.”

Sadie’s getting married!!!!! To the most amazing man, and we are beaming!!! Today was an absolute dream. I love every second of being @legitsadierob mom and can’t wait for @christian_huff to join the fam! ❤️

Sadie held off on sharing any photos herself, promising when she shared the proposal video that there were “so many more pictures to come.”

Finally, those pictures came on Monday (June 10), and they perfectly capture the magical proposal and the love that Christian and Sadie share for each other.

Sadie started by sharing a slideshow of pictures, captioning it in part, “This is like a dream, but way better because I actually got to wake up today and it is all REAL.”

She promised there would be “a million more” pictures to follow and shared an additional engagement photo just a few hours later.

the instant reaction. This is like a dream, but way better because I actually got to wake up today and it is all REAL. We are overwhelmed by all of your love and excitement for us. I’m really engaged to my favorite person ever! I’m blown away by the love this man shows me in the details of everyday, but especially yesterday. You’re so intentional Christian Huff and you are so wildly loved by your fiancé. Now that I’m done writing this caption I’m going to go run back into your arms and keep celebrating what God did. I love you today and I’ll love you forever. & trust me friends, there are a million more pics to come. ??♥️

We hope Sadie stays true to her word and shares even more photos in the future, because it looks like Christian orchestrated the most magical proposal!

You can see how the whole thing unfolded by watching the video Sadie shared of the proposal below. She’ll never forget that moment, that’s for sure!

I screamed YES. so many words and so many more pictures to come, but for now just know my friends I’m the happiest human in the world on June 9th, 2019 today and for the rest of my life. I GET TO MARRY THIS MAN. God is faithful and so so good♥️