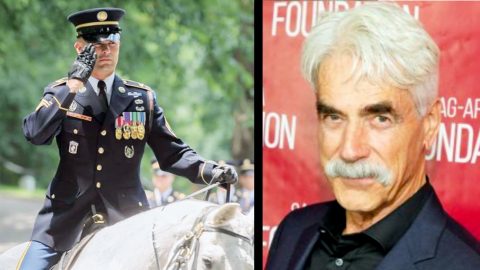 Known for his signature husky voice, many have said that Sam Elliott could read the phone book and make it sound riveting. But the seasoned actor is respected in the entertainment community for many reasons other than the sound of his voice.

Elliott has been acting for decades, landing his first role in the 1967 film Way Out West. He played an uncredited Missouri townsman in the film.

That first project signified what Elliott would later become known for…Westerns. He has played many a rancher and cowboy through the years, starring in films such as The Quick and the Dead and Conagher. One of his most recognizable roles came in 1993 when he played Virgil Earp in Tombstone.

More recently, Elliott has found himself back in the spotlight thanks to his work on the hit 2018 adaptation of a Star is Born.

He was nominated for an Academy Award for playing Bobby Maine, the older brother and manager to Bradley Cooper’s Jackson Maine.

That role showed modern audiences that Elliott doesn’t always have to play a cowboy in order to pull off a film. This is something that his longtime fans already knew, since Elliott’s extensive filmography shows just how varied his roles have been.

On more than one occasion, Elliott has starred in film with a military theme. Through the years, he has portrayed Sergeant Major Basil Plumley in We Were Soldiers, Army officer Sam Damon in Once An Eagle, and Union Cavalry General John Buford in Gettysburg.

Since it's General Buford birthday, let us all pause for a moment & look at some photos of the man who brought him to life in "Gettysburg".

After starring in such films and serving in the National Guard when he was younger, Elliott has earned a great deal of respect among veterans and active duty service members. “He’s known throughout the military for portraying American heroes in film,” Army veteran Neal Schrodetzki told Deadline.

It’s for that reason that Schrodetzki and fellow Army veteran Ethan Morse called on Elliott to help them with a new docuseries they are creating as a followup to their award-winning project The Unknowns.

Called Honor Guard, the new four-part series will follow “U.S. Army soldiers who volunteer for the grueling training required to serve at the 3rd Infantry Regiment, aka The Old Guard, the oldest active infantry regiment in the Army,” as the Deadline article describes.

It is the same regiment honored with guarding the Tomb of the Unknown Soldier in Arlington National Cemetery.

On his final walk, guard lays roses at Tomb of the Unknown Soldier https://t.co/JfQGntEH6X pic.twitter.com/8ilcmSfqre

Both Schrodetzki and Morse guarded the Tomb during their time in the service.

Why Sam Joined In

The series will showcase the Old Guard’s never-before-documented training cycles, giving the public the first chance to see what they go through. Elliott will serve as narrator throughout the series, a role that he was honored to take on.

“It was an opportunity for me to honor those that honor the fallen,” said Elliott when asked by Deadline why he chose to participate in the project.

So far, no release date for Honor Guard has been announced, but you can keep up-to-date with the project’s progress by following its Facebook page here. In the meantime, get an idea of the type of filmmaking you’ll witness in the series by watching the trailer for its predecessor, The Unknowns, below.

Hats off to Elliott for lending his time and his voice to such a historic and worthy project.