By Miranda Raye on August 6, 2019
Advertisement 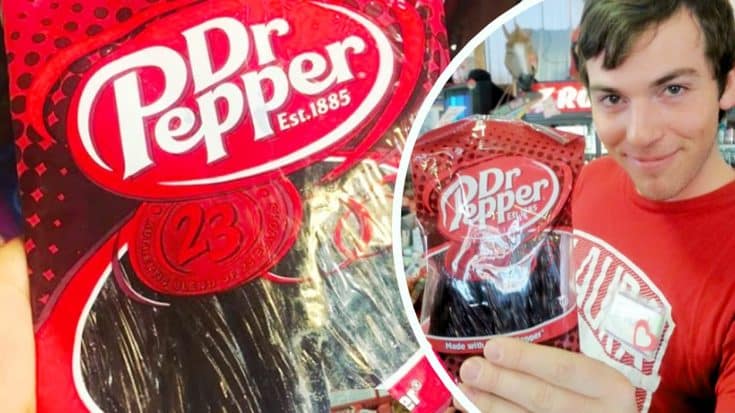 While some people argue over whether Coca-Cola or Pepsi is the superior soda, others believe that Dr. Pepper is where it’s at. The fizzy drink famously boasts its blend of 23 flavors, which results in a taste unlike any other soft drink on the market.

So what if we told you that somebody took that taste and placed it in a licorice stick for the general public to enjoy? You’d probably think we’re pulling you’re leg, but we’re not kidding!

Believe it or not, Dr. Pepper licorice is a real thing. And it isn’t too hard to find either. In addition to being available on Amazon, the sweet treat can also be found on a number of other websites, including Walmart.com. You’ve likely even seen it in the candy aisle of your local grocery store!

Did you know they make Dr. Pepper licorice? And it's actually pretty good. Day made. pic.twitter.com/kR6LfNCfnH

If you have ever seen the Dr. Pepper licorice and wondered how it tastes, let us fill you in.

It turns out that the licorice is made with real soda, so it carries that unique Dr. Pepper taste millions know and love. When you eat the licorice, it’s basically like you’re eating a Twizzler. Only instead of eating something that is cherry or strawberry flavored, you’re enjoying a sweet treat that tastes just like Dr. Pepper.

Every bag of Dr. Pepper licorice contains 21 twists, which are each five inches long. You may want to look into buying more than one bag, because these things are so tasty, you’re sure to devour them in seconds!

If Dr. Pepper isn’t really your think, you can try one of three other soda-flavored licorice sticks. There are also A&W Root Beer, Crush Orange, and Crush Grape licorice sticks on the market for you to try!

Have y’all ever had one of the Dr. Pepper licorice sticks before? If so, what did you think of it?

We wonder if Reba McEntire and LeAnn Rimes have ever tried the Dr. Pepper licorice. If you recall, the two country superstars appeared together in a Dr. Pepper commercial a few years back.

To this day, it’s still one of the most well-known commercials featuring country singers! You can revisit that clip below.