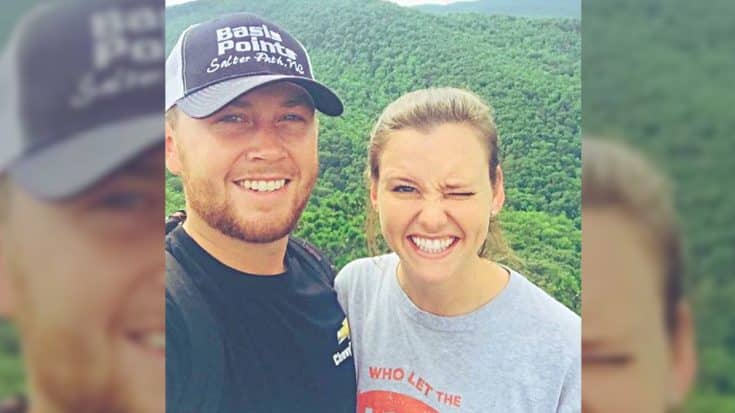 Way back in kindergarten, Scotty McCreery met a little girl named Gabi Dugal. The two became friends, and remained close even during and after his time on American Idol.

Shortly after Scotty won the competition, he and Gabi began dating. Although Scotty never really brought her into the spotlight until more recently, she was still someone that fans were familiar with. That’s because she appeared in two of his music videos, including the one for “The Trouble With Girls.”

As time passed, Gabi seemed to grow more comfortable in the public eye. In recent years, she’s been a constant fixture at Scotty’s side for awards shows and other events.

So you can imagine how overjoyed his fans were when, in September, he revealed that he had proposed to Gabi after a hike to one of their favorite spots in North Carolina.

The couple has been busying planning their wedding ever since, and finally tied the knot on Saturday (June 16). Keeping with the theme of their engagement, the two were married in front of 200 friends and family members during a ceremony that took place in the mountains.

Gabi spoke to People about the color scheme (black, white, and gold) and decor, which she wanted to keep simple:

“I kept it very classic. I went with greenery and white flowers, some lanterns and candle votives [for a] rustic feel. We fell in love with the mountains during the summertime [when Scotty proposed], and our [venue] is like a little castle in the woods.”

At the reception, the couple served Cajun food as a tribute to Gabi’s Louisiana roots, served pie instead of cake, and danced to Elvis’ “Can’t Help Falling in Love.”

Gabi wore what People described as an “elegant,” sleeveless gown designed by Morilee, while Scotty donned a dashing black tux.

As nice as it is to imagine the beauty of the McCreery wedding, you can finally see it for yourself. The couple released their first wedding photo through People, and it’s breathtaking.

How beautiful is that? You can feel the love they have for each other just by looking at that single picture.

If you want to know more about Scotty and Gabi’s love story, all you have to do is listen to his new song, “This Is It.” He wrote the song before they got engaged, and it details their entire relationship as well as his proposal. It’s about as romantic as it gets.

Congratulations to Scotty and Gabi! We wish them a lifetime of happiness together!