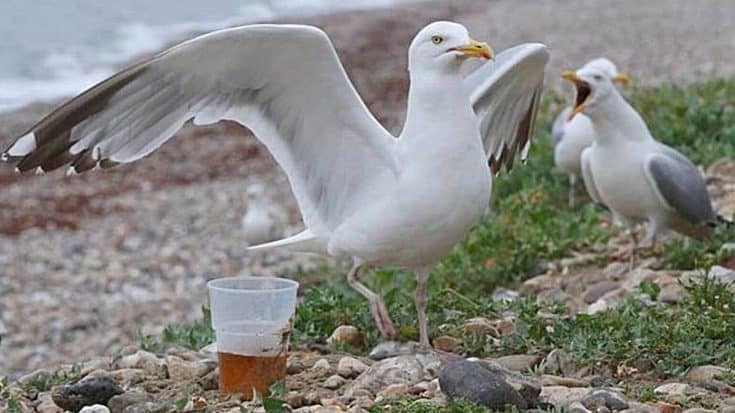 According to the Royal Society for the Prevention of Cruelty to Animals (RSPCA), many seagulls have been reported to be getting drunk on beer in cups leftover on the beach from party-goers the night before.

Drunk seagulls. Experts investigating a rise in seagull attacks in Brystol claim the birds are lashing out because they…

One firefighter reported finding a gull reeking of beer and acting out of character by falling off a roof because it was too drunk to fly. When the firefighter went to check on it the bird flew straight at him so he caught it and it threw-up on him.

“When we arrived he had already fallen off the roof, he was sitting shaking his head and he then tried to fly and he nearly hit me in the face, I caught him and he threw-up all over me and he reeked of beer.”

The RSPCA believes however it wasn’t from beer left in cups, they believe it was from left over brewing products they the birds must have eaten. Dr Rebecca Nesbit, an entomologist with the Society of Biology, also said she believes they have been eating flying ants that contained a chemical that makes then hallucinate since it was during the time of the annual Flying Ant Day.

“They are getting in such a state that they are almost unconscious. People have been taking them to the vet, who has thought they were on their way out, so some of the them have been put to sleep.”

Pretty wild huh? Never in our life did we think we’d hear about seagulls getting drunk but when we did we definitely had to let y’all know about it.

Watch the video below to get more details on the situation.