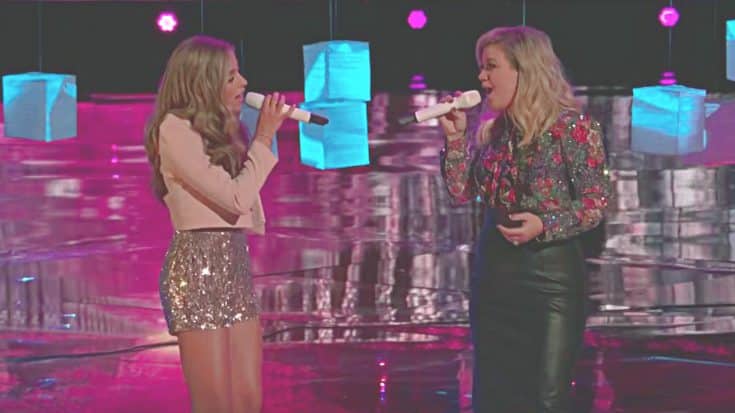 Every time The Voice reaches the finale, there’s a set of performances that viewers can’t wait to see. Those performances would be the duets between the coaches and their finalists.

Past coach-finalist duets have produced some of the most memorable performances in Voice history.

It’s hard to forget the joy that radiates from coach and contestant alike as they get the chance to sing together.

Three of the four coaches from Season 14 are seasoned pros at these duets by now. But with this being her first season on the show, the whole thing was entirely new to Kelly Clarkson.

Of course, being the skilled entertainer that she is, Clarkson tackled her coach-finalist duet in stride. But the real star was her finalist and eventual winner, Brynn Cartelli. From the get-go, Cartelli was hailed as a “one to watch” on the show.

Since the song was so popular, other artists felt inspired to offer up their own renditions of it. Just a few of these artists include Donny Osmond, Miley Cyrus, and Susan Boyle. Now, Clarkson and Cartelli can add their names to that list.

While Clarkson and Cartelli’s performance was a duet, it was clearly structured to showcase Cartelli’s voice over Clarkson’s. You can tell that Clarkson deliberately took a step back to give Cartelli the chance to shine, and shine she did.

At one point early on in the performance, Cartelli was left to sing all on her own. She took that moment to showcase the deepest part of her range, and hit one insanely low note after the next.

As if that wasn’t enough, Cartelli later went on to display the higher end of her range by belting out some powerful parts.

Her voice managed to soar above Clarkson’s in these moments, and if you know anything about the power of Clarkson’s voice, you know how impressive that is.

In addition to showcasing Cartelli’s outstanding talent, the performance proves just how much admiration she has for her coach, and vice versa. You’ll be delighted by the duet when you watch it in the clip below.

It’s performances like these that make the coach-finalist duets so beloved by all who watch The Voice!