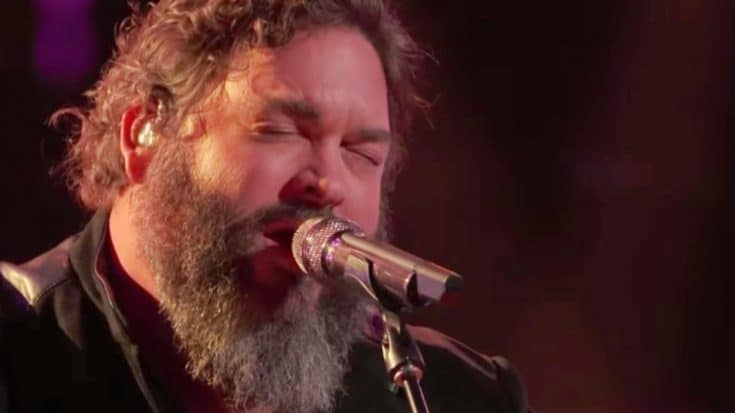 A Standout From The Start

As Season 15 of The Voice moved into the live shows, viewers were still familiarizing themselves with the contestants. But at that early stage, there was one artist viewers were able to recognize by name…Dave Fenley.

We were first introduced to Fenley during the blind auditions, when he earned a two-chair turn for his rendition of Travis Tritt‘s “Help Me Hold On.”

He chose Blake Shelton as his coach. As the season progressed, it has became clear that Fenley was going to be a contestant to beat.

Fenley continued to fight his way through the competition, winning both his battle and knockout rounds. In fact, his knockout performance of Lionel Richie‘s “Stuck on You” was hailed as one of the best of the season.

With a lot of pressure weighing on his back, Fenley moved into his first live show with a performance of a country staple. The song he chose was Willie Nelson‘s “Angel Flying Too Close to the Ground.”

Released in 1981 as part of the film Honeysuckle Rose, “Angel Flying Too Close to the Ground” is a short and simple song. Its lyrics tell the story of a man who found a woman in need of love and healing, which he was able to give her.

But, toward the end of the song, the man acknowledges that after receiving his love and care, his “angel” is stronger now. Because of this, he understands if she wants to leave him and carry on her way, even if it breaks his heart.

The song became Nelson’s seventh number one hit, and remained on the country chart for a total of 14 weeks. It has since been covered by a number of artists, including Bob Dylan, Alison Krauss, and now, Fenley.

Fenley kept his rendition of the song pretty true to Nelson’s original, opting for a more stripped down, tender approach to the performance. The song was the perfect fit for him, as he has proven just how well he can dig out the underlying emotions in a song.

After singing softly for almost the entire performance, those emotions came out in full force when Fenley let his voice explode in a burst of power at the end. The result can best be described as spine-chilling.

When an artist has the power to make you feel a song like that, you know they’re the real deal. Fenley certainly is…

Check out his outstanding performance of Nelson’s classic song by tuning in to the video below.

Fenley ended up making it pretty far on The Voice, and was eliminated during an Instant Save, just shy of the semifinals.