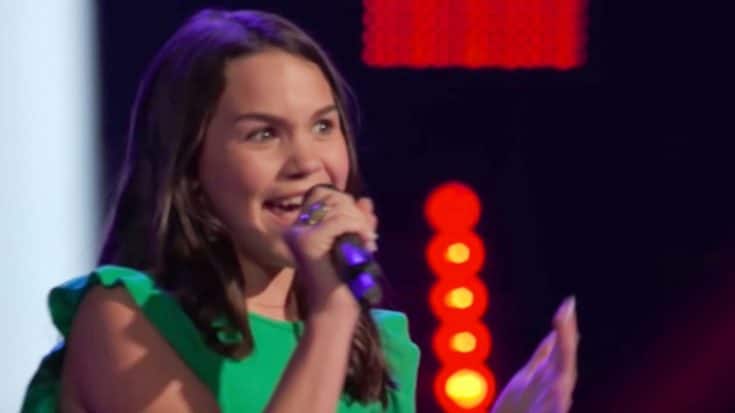 Whenever a new Voice contestant steps on stage for their blind audition, they have one goal in mind, and that’s to make at least one coach turn their chair around for them.

The hopeful singer may choose a current hit as their blind audition song, but they run a risk in doing so.

On the one hand, modern hits are fresh in the coaches’ minds, and they’ll appreciate hearing a voice that can offer a new sound to those songs. But on the flip side, if the contestant doesn’t do enough to stand out, their audition can fall flat, since the coaches are used to hearing the song done in the same way.

Fortunately for one young singer, she put the perfect twist on a hot country hit in order to snag not one, but two chair turns.

What was the song she chose to sing? Bebe Rexha and Florida Georgia Line‘s “Meant to Be.”

Released in October 2017 by pop singer Rexha, “Meant to Be” immediately took off and debuted at the top spot of the Hot Country Songs chart. Remarkably, it has held on to that spot for 50 weeks.

Needless to say, the song shattered many previous Hot Country Songs chat records, including the one previously set by Sam Hunt‘s “Body Like a Back Road” for the longest run at the top of the chart.

With something that popular as her blind audition piece, 13-year-old Voice contestant Reagan Strange had to do something special to the song to make it her own. And that’s exactly what she did.

Rather than singing “Meant to Be” in its familiar, upbeat style, Strange chose to go for a more tender approach. This led to the song sounding much more ballad-like than the original, making Strange stand out in an instant.

Adam Levine was the first to turn his chair for the young singer, followed by Blake Shelton. This of course, upset Levine, making him think he had lost Strange to Shelton, since she sang a country hit.

But Levine had no need to worry. Strange was completely won over by his pleas for her to join his team, as it was clear that he had immense faith in her and her talent.

“It was very [season four winner] Danielle Bradbery-esque,” Levine said. “You could go all the way here, I believe that.”

While she didn’t go all the way, Strange ended up making it pretty far in the competition. Check out the performance that started it all for her by tuning in to the video below.