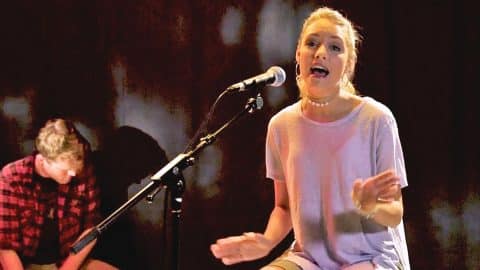 It only took one song for America to fall in love with then-16-year-old Emily Ann Roberts.

The Tennessee teen won the hearts of country fans with her blind audition of Lee Ann Womack‘s “I Hope You Dance” on Season Nine of The Voice.

Roberts also won a spot on Blake Shelton‘s team with that audition, and he helped guide her all the way to the finale. During her time on The Voice, Roberts charmed viewers with her renditions of country classics such as Patsy Cline‘s “She’s Got You” and Dolly Parton‘s “9 to 5.”

After being a fan-favorite throughout the competition, Roberts ended up placing second behind Team Adam‘s Jordan Smith. Her fellow Team Blake member, Barrett Baber, placed third.

Miss Her Covers? You Can Hear Even More Here

It has now been a few years since we were first introduced to Roberts on The Voice. Shelton remains her devoted mentor, and was happy to share a video that features her singing a mashup of country classics and other big hits.

“In case y’all forgot, this girl can sang (sic)!” Shelton wrote along with the video of Roberts’ mashup.

Roberts wrote that she couldn’t pick just one of her favorite country songs, which is why she decided to do a medley.

Her performance contained country classics such as Loretta Lynn‘s “You Ain’t Woman Enough” and modern hits like Carrie Underwood‘s “Before He Cheats.” Overall, most of the songs championed a message of girl power, allowing Roberts to have fun and show off her sassy side.

We always loved Roberts’ covers on The Voice, so we’re glad she decided to do this mashup! You can enjoy it in the video below.

Shelton is right, Roberts has one powerful voice!

Tag your favorite song/artist below!!

I couldn't pick just ONE of my country favorites… so I decided to sing them all!!