By Miranda Raye on August 10, 2018
Advertisement 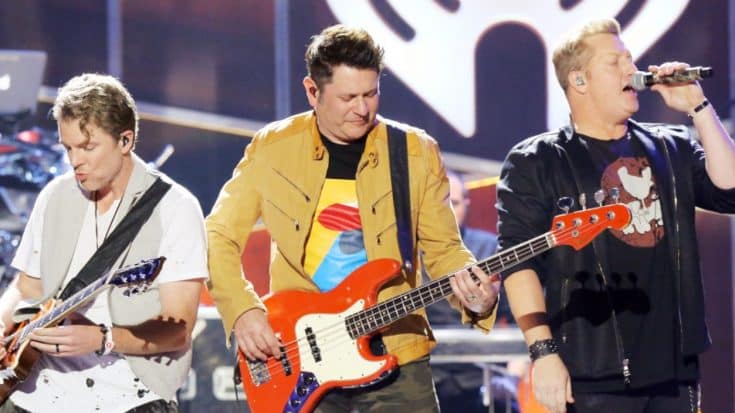 Imagine this…you’re at a concert and you’ve been waiting all night for your favorite country group to sing some of their biggest hits. Suddenly, the group leaves the stage. You think they’re building up hype for an encore, but they never return.

Then, security makes its way into the crowd and starts ushering you out of the venue. With no warning or explanation, your concert experience has come to an end.

That scenario is exactly what unfolded at a Rascal Flatts concert in Indianapolis on Thursday night (August 9). Fans were waiting for them to sing some of their biggest hits, such as “God Bless the Broken Road” and “Life is a Highway,” when the group suddenly left the stage and never came back.

One attendee captured a video of the group’s keyboard player, who quickly left the stage after it seemed like someone backstage told him to do so.

After that, the audience thought that Rascal Flatts would come back out for an encore, but they never did. Instead, they found themselves being evacuated from the venue by security. One concert attendee named Caitlyn Conlon told The Indy Channel news that security told them they needed to leave immediately.

Many confused and angry fans took to social media following the experience, wondering why Rascal Flatts felt the need to cut their concert short. There was a lot of speculation, but no solid answers.

Really confused why @rascalflatts didn’t do an encore tonight at @ruoffmusicenter… Ive been a fan since day 1 and they have never not done an encore at the 11 concerts I’ve attended. What happened????

I would just like to say screw you to @rascalflatts for not singing God Bless the Broken Road, Summer Nights, OR LIFE IS A HIGHWAY

I have no idea. Everyone waited for an encore with 15 min left until curfew & security was told to evacuate everyone as soon as possible

Will NOT be seeing @rascalflatts in concert ever again. Massive disappointment. I need to be refunded for the money I WASTED on you

@rascalflatts sorry you didn't finish the show tonight in Indy. Praying everything is okay. I have seen you 7 times and I know you wouldn't end like that if something wasn't wrong. Love to you all??

Well it turns out that something was wrong. The following morning (August 10), Rascal Flatts released a statement to explain why they ended their concert so abruptly.

As the group explained, there was a “security concern” that prompted them to leave the stage and get everyone else out of the venue.

“The safety of our fans, band, and crew is always the top priority for us,” read the statement.

It’s unfortunate that Rascal Flatts’ Indianapolis show had to come to a quick end, but we understand why. Safety first!

The group’s next show is at the Hollywood Casino Amphitheatre in Chicago. Hopefully they are able to carry out their full show without needing to deal with any other security concerns.