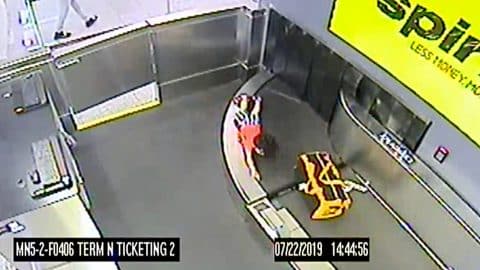 At the Hartsfield-Jackson International Airport, Edith Vega was printing out her boarding pass when she put her two-year-old son, Lorenzo Vega down for just a few seconds. The moment his feet hit the floor he took off!

What Was The Kid Thinking?

Lorenzo climbed behind the unstaffed check-in counter and quickly pulled himself onto the baggage belt. We can only imagine what was going through his head; he probably thought it looked like a cool slide in which he wanted to partake in.

When Edith looked up it was too late. Lorenzo was being pushed into a baggage tunnel by a big suitcase that he attempted to climb over but with no success. It pushed him through and Edith tried to go after him and but the airport staff stopped her for her own safety.

He Went Joyriding For 5 Minutes

The two-year-old was gone joyriding for a whopping 5 minutes, passing through X-Ray machines and made it all the way back to the TSA luggage room before someone finally spotted him and grabbed him off the conveyer belt.

Fearing for his health the kid was immediately taken to the hospital and only suffered from a few cuts to his arm and a small fracture to his right hand. He was definitely lucky because it could have gone horribly wrong.

Afterwards, the boy went home and the footage was released to Facebook and went viral.