By Jennifer Pernicano on September 25, 2018
Advertisement 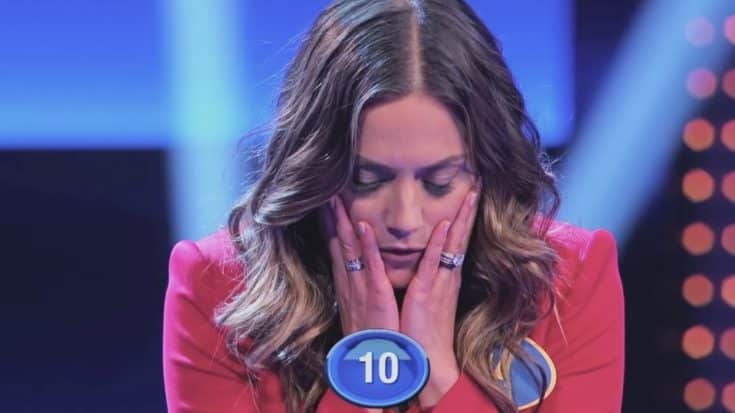 During the summer months, fans are treated to a slew of game shows, thanks to ABC’s Fun & Games line up on Sunday evenings. Classic game shows such as The $100,000 Pyramid, To Tell The Truth, Match Game, and Celebrity Family Feud were revived and for the past few years, have been serving as such great entertainment the whole family could enjoy together.

Our favorite out of those has got to be Celebrity Family Feud, where two celebrities – and their families – face-off in hopes of winning $25,000 for their favorite charity. Some of the most memorable episodes have featured ventriloquist Jeff Dunham, the Robertson family from Duck Dynasty, and plenty of country singers like Lee Brice, Scotty McCreery, Kellie Pickler, Sara Evans, and Jana Kramer.

No one was more excited than Kramer to be competing on the season finale of the fan-favorite game show Sunday night (Sep 23). She has been posting teasers for a few weeks, reminding fans to tune in.

Flashing back to the greatest day EVER! My favorite game show of all time happened and I can’t wait for y’all to see….set your calendars….September 23rd ❤️ @familyfeudabc

She and her family, including husband Michael Caussin, faced off against actor Gary Busey and his family. Before either celeb could move on to actually win the $25,000 for their charity, they had to play a few rounds head-to-head.

Kramer and Busey rocked the first round.

After a few rounds of competition, and questionable answers on Busey’s part, Kramer and her family advanced to the Fast Money Round, where they could win a huge chunk of money for the charity Safe Horizon, an organization whose “mission is to provide support, prevent violence, and promote justice for victims of crime and abuse, their families and communities,” according to their website.

Kramer went first in the Fast Money Round and had to answer five questions in under 20 seconds. While she stumbled a little bit, and gave an answer even she didn’t really know how to explain, she ended up getting 149 points – meaning that Caussin only needed 51 points to win the $25,000!

When Caussin came on stage, even host Steve Harvey said, “A couple surprising answers, but she did pretty good.” Watch the Fast Money Round in the video below.

Luckily, Caussin pulled through and they won!

For Kramer, the win meant so much more to her than any other win because as a survivor of domestic abuse herself, it “meant the world” to her knowing she was able to help out women who were in her shoes many years ago. See her sentimental post about it below.

Tonight was so much more than winning at my favorite game show. For me it was winning for my favorite charity @safehorizon. As a survivor of domestic abuse it meant the world to me to know that the money we won is going to a place that is home to those who need safety and help. Please go to @safehorizon if you’re not in a safe environment and need help. There is help out there for you!