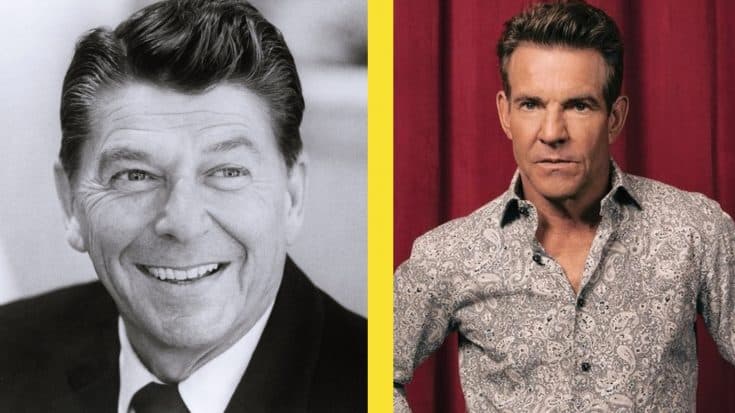 In the first look at this new film biography of President Ronald Reagan, the starring actor Dennis Quaid is shown dressed for the part and photographed in a way that captures the essence of the former president.

66-year-old Dennis Quaid has been cast as the former president in a forthcoming film titled Reagan. The film was adapted from author Paul Kengor’s book on Reagan called The Crusader: Ronald Reagan and the Fall of Communism.

According to an article by Entertainment Weekly, when Quaid was first offered the starring role – he was confused!

“I didn’t understand why they were offering me Ronald Reagan because I just didn’t see it. I admired him so much, and so I had a chill of fear go down my spine when I was offered it. That’s usually kind of a sign that maybe I should do it because it’s out of my comfort zone.”

The movie is set to share stories with the public that have never been heard before and producer Mark Joseph says he spoke with more than 50 people who knew Reagan to get these stories and build inspiration for parts of the film.

Reagan will follow the former president’s life starting from when he was a child through his rise in Hollywood as a young man and then into his titular role as POTUS and the years that followed.

Joseph says that Quaid’s image was not changed a great deal to fit the role, adding: “He already has the look, and then he just had that smile and that optimism, the kind of things you can’t make up for with hair and makeup…Honestly, if you had magically told me you could have any actor you want in Hollywood or Dennis Quaid, I literally would have chosen Dennis Quaid.”

See Dennis Quaid dressed up and fully in character in the image below and tell us what you think about this upcoming movie!

Get a first look at Dennis Quaid as the 40th president in the upcoming biopic 'Reagan.' https://t.co/Qk89rep033

As a bonus – check out his 2018 interview straight from Reagan Ranch in California where he discusses the project at the very beginning.