By Miranda Raye on March 12, 2019
Advertisement 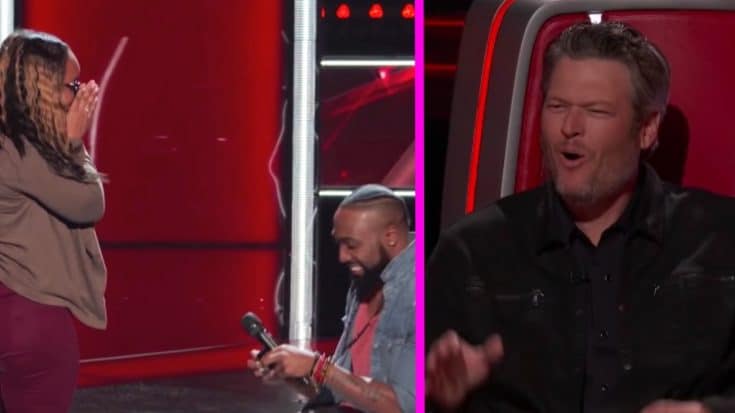 A Romantic Surprise At Audition’s End

The Voice blind auditions are always exciting, as it marks the first time in the competition that the singers get to showcase their talents in front of the coaches. They are also nerve-wracking, as a successful blind audition results in placement on the show.

You know what else can be nerving and exciting at the same time? Proposals!

So when one Chicago-based singer got his chance to compete on the Voice, he decided to bundle all of the nerves and excitement up into one day by proposing to his girlfriend on the day of his blind audition.

While all the coaches were bee bopping along to Denton Arnell’s performance of Drake’s “Hold On, We’re Going Home,” John Legend was the only one who turned. He did so pretty early on, making it clear he heard something special in Denton’s voice.

Drop a ? in the comments if the talent this season is giving you LIFE. #TheVoice

After chatting with his new coach and the others for a little while, Denton asked if it would be alright if he welcomed his girlfriend, Tiffany, to the stage so he could share the special moment with her.

The coaches were happy to see Tiffany, who introduced herself to all of them. She appeared giddy over the fact that her boyfriend had just secured a spot on The Voice, but she had no idea what was in store.

“So, being that [John] gave me a yes, I wanted to see if Tiffany would give me a yes,” Denton said, pulling out a ring box…he was about to pop the question!

A Proposal To Remember

But everyone’s initial shock soon turned into uproarious laughter when Denton tried to get down on one knee. Let’s just say, things didn’t exactly go to plan!

Instead of smoothly sliding down onto the stage to rest on one knee, Denton and Tiffany bumped heads!

@dentonarnell’s proposal may have hit a BUMP in the road, but all’s well that ends well! ??❤️ Congratulations, you two! #TheVoice

The coaches couldn’t contain their laughter, and neither could Denton and Tiffany. In fact, Tiffany was still trying to hold back some giggles once Denton finally did get down on one knee and ask her to marry him.

Of course she said yes, and the coaches and crowd celebrated with the new Voice contestant and his now-fiancée.

According to the Orlando Sentinel, Denton and Tiffany first met in church and have been dating for three years. We wish them many more years of happiness as they move on through life together!

You can watch Denton’s romantic and hilarious proposal by tuning in to the clip below. Congratulations to him for getting engaged…and getting on the Voice!