Semi Truck Tries U-Turn And Gets Stuck On Bridge

By Megan Dinsdale on June 27, 2019
Advertisement 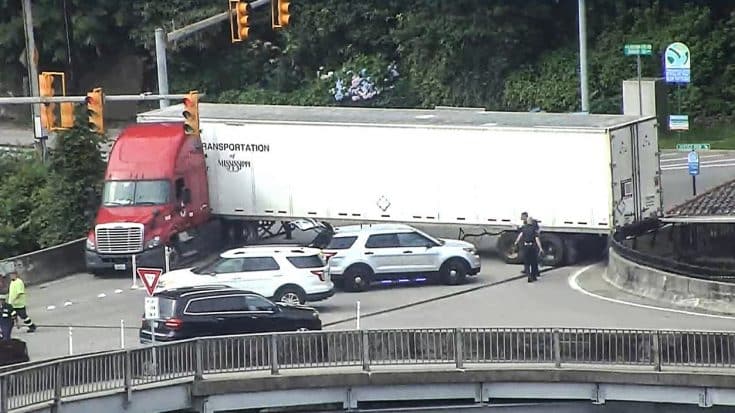 Have you ever seen an incident and wondered to yourself, “How the heck did that happen?!” Well, when a big red 18-wheeler gets slammed between two barriers on a bridge we wonder the same thing.

On Monday, June 24th, a semi-truck driver tested his driving skills and unfortunately came short. In the process, he blocked an entire bridge in Charleston, West Virginia. There has been no reports of anyone being injured thankfully, but you do have to wonder how the driver pulled off this incredible feat. Even the police and local news station couldn’t quite figure out how this happened. Take a look in the tweet below from a local news station WVBA.

Fortunately For Us, Someone Caught The Whole Incident On Video

A mother was out doing errands when she noticed a semi-truck trying to u-turn on the bridge and decided to capture it all on film. She definitely had more patience than most of us would as she calmly commentates on the video. Once again we are reminded how patient mothers are, great job!

“I really don’t think he thought this through… Man, he is really forcing that truck,” said Sandebel in her video.

The halfway point of his good driving ?He could have easily reversed but chose to flip a U turn on the bridge ??‍♀️

The truck driver tried multiple times to force the u-turn and finally, he came to a stop, completely stuck between the bridge’s two barriers. Authorities were called on the scene to get the truck unstuck. In the video below you can see a heavy-duty tow truck pull the larger semi-truck free to clear the bridge.

Be safe out there on the roads, folks!

At any given time over a million semi-trucks are out on our roads keeping our economic infrastructure running smoothly. They have some of the longest hours and often times make many personal sacrifices being away from home out on the dangerous highways. Authorities say GPS can often lead these trucks having to make u-turns. This time the driver didn’t make quite the best decision but thankfully no one was hurt in the process.