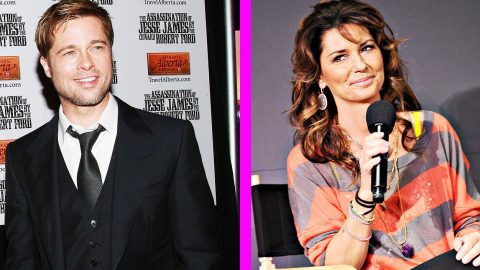 In December 1998, Shania Twain released a little song called “That Don’t Impress Me Much” as the seventh single off of her wildly successful album Come On Over. The music video helped it become the iconic song it is today and made Twain’s leopard print outfit a staple in her live shows and even her future album art.

Your chance to win a copy of Shania Twain's "NOW" album…just by voting on the Digital Download – here:https://t.co/tP8myvRz7J pic.twitter.com/mAAUrsXXGO

In 2017, Twain did an event with Billboard where she was asked about name dropping Brad Pitt in “That Don’t Impress Me Much.”

“You want to know the truth about this story? I’ve never told this before. I’m going to say it now,” Twain revealed. “I remember I had a girl friend visiting me and it was near Christmas and we were baking cookies. I was writing this album and there was a scandal of [Pitt] and Gwyneth [Paltrow] where there was naked photos of him [in Playgirl magazine].”

She continued, “And this was like all the rage. I just thought ‘I don’t know what all the fuss is about.’ I’m like, ‘Well that don’t impress me much, I mean what is all the fuss? We see people naked every day.’ That’s really what I thought. I wasn’t picking on Brad Pitt. But that was just the association in that moment and things we make fusses about and whatever. Of course, it could have been any gorgeous guy.”

Now, three years after revealing she didn’t see the fuss about Brad Pitt’s naked photos, she wished him a happy birthday on Twitter, making a joke about the Academy Award-winning actor.

She wrote, “Happy Birthday to Brad Pitt, I’ll make an exception for today.“

Although Pitt has never officially said anything about “That Don’t Impress Me Much,” we hope he saw Twain’s birthday message to him!

Watch the music video for “That Don’t Impress Me Much” below.