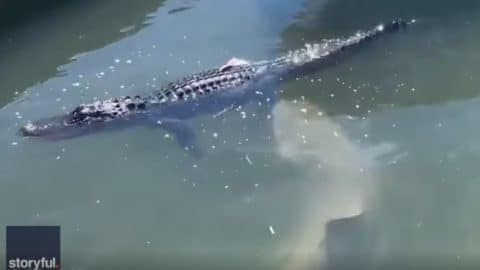 Cory Conlon was visiting Hilton Head Island, South Carolina and got some incredible footage of a shark biting on an alligator’s foot as it was floating in the ocean.

The video started out showing a three to four-foot alligator floating in the water near some boats parked on a dock. Beneath the alligator, you could see a massive shark way wider and longer than the gator and it was slowly lurking below.

Onlookers watching threw what appeared to be a chunk of meat into the water near where the gator was floating. The chunk of meat would sink and the shark swimming below the gator would eat the meat as it sank.

Someone later threw a hotdog into the water and it landed right beside the gator. The shark circling must have mistaken the gator’s foot for the hot dog and things got aggressive.

The shark swam up and took a little nibble of the gator’s foot, triggering the gator to thrash around in the water towards the shark. The fight only lasted half a second until they both decided to back down and go about their own business.

The video footage was captured by Taylor Soper who said he filmed it at Murrells Inlet in South Carolina. You can the shark/gator footage below.