By Manly Bryant on August 19, 2019
Advertisement 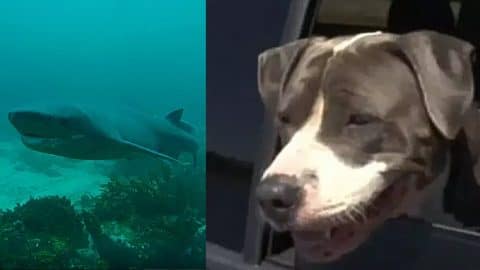 James White was fishing on the shore of Bodega Bay in Sonoma Country, California when he hooked a 5ft 9in Sevengill shark. He actually didn’t know it was a shark until he got it pulled into the shallow water which took him about 10 minutes to reel in.

“The only way I think I was able to get the line back is because it was swimming towards me.”

After James reeled it in he was trying to get the hook out of the shark’s mouth so he could release it back into the ocean and it fell to the ground and immediately flopped over and sunk its teeth into his ankle.

“Immediately there was blood everywhere, the first bite punctured an artery,” James said. “The pressure was intense.”

The shark had a strong grip on his leg and there was nothing he could do to get it off so he yelled to some other fisherman a few hundred yards away but they couldn’t hear him. However, James’ 100-pound pitbull Darby sitting in the car heard him loud and clear.

Pit Bull To The Rescue

Darby, apparently opened one of the car doors and ran full speed down the hill to James and launched onto the shark biting into its gills. That actually made the shark bite down even harder though so James told Darby to stop.

“I told him, ‘No back off’ and then [Darby] repositioned and grabbed it by the tail,” said White . “He literally ran up the hill with it and pulled it off my leg.”

Once Darby bit down on its tail the shark let go of James’s ankle and then he safely grabbed the shark by the tail and tossed it back into the water. He was so thankful that Darby came to the rescue because he didn’t know how he would have got it to let go if Darby didn’t help.

James later spoke about how proud he is of Darby for springing into action saying that “he is such an affectionate, playful dog (Darby’s nickname is “House Hippo”) he didn’t know he was capable of doing what he did.”