Shark Chomps Down On Diver’s Camera, Revealing Rare View From The Inside

By Manly Bryant on April 29, 2022
Advertisement 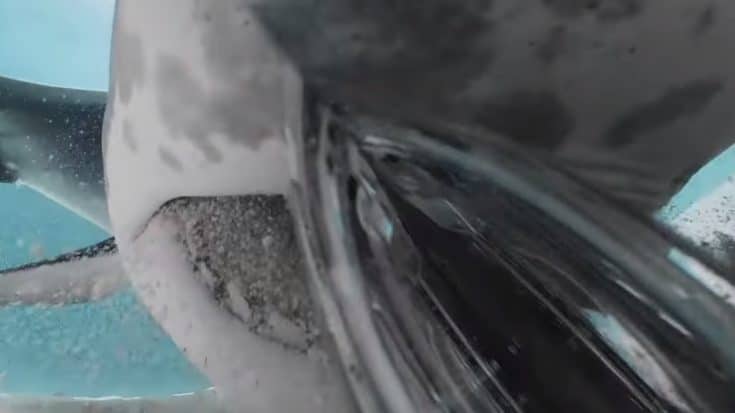 Instagramer, conservationist, and cinematographer, Zimy Da Kid, posted an incredible video of a tiger shark swallowing and chewing on his underwater camera.

The video shows the camera laying on the ocean floor with many fish swimming around until a shark curiously swam up looking at the strange object. Within seconds of investigating, the shark then grabs it in its mouth and takes off swimming with it.

The camera was rolling the entire time as the shark chomped on the camera trying to see if it was a source of food. Clear video showed what it looks like the inside of the shark’s gills and up-close and personal footage of its razor-sharp teeth.

Since being posted to Zimy Da Kid’s Instagram, the video has gotten over 92,000 views as of press time.

“That moment this curious Tiger Shark decided to taste my @insta360 camera during our last @deepseaguardians expedition,” the caption of the video says.

Zimy Da Kid said the video was filmed in Fuvahmulah, an island in Maldives according to the hashtags that he used in the caption of the post.

A few people watching the video commented on what they thought about the wild encounter.

“Are you serious, this is wild,” commented an Instagram user.

“I mean, it seems like there are plenty of fish around if he’s that hungry,” posted another.

A third individual said, “I wanna see the camera exterior damage,” along with a laughing emoji.

“That was like a whole different dimension inside the shark never seen before,” another posted.

Watch The Shark Video Below