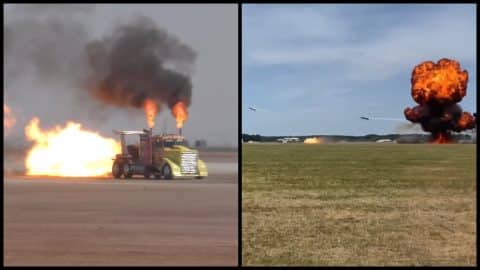 Chris Darnell, the fearless driver of the world record jet-powered semi-truck Shockwave, lost his life in a tragic accident during an air show performance in Michigan on Saturday (July 2).

Shockwave is a full-sized semi truck fitted with three jet engines, giving it an output of 36,000 horsepower. The engines allowed the truck to travel a quarter-mile in less than 7 seconds. 40-year-old Chris Darnell drove Shockwave for years prior to Saturday’s accident, and was a highlight of airshows around the country. Darnell used the truck to race airplanes going 300 miles per hour, and was brought to a stop on the tarmac with 2 aircraft parachutes.

During a performance at Battle Creek Executive Airport in Michigan, Darnell was behind the wheel as Shockwave raced two inverted aircraft from a standing start. Video captured by some in attendance show the truck gaining speed and outpacing one of the airplanes overhead. Moments after the truck passed through pyrotechnics, it appeared to roll and catch fire.

Darnell’s dad and co-driver, Neal Darnell, shared a post to the Shockwave Facebook page following the crash blaming it on mechanical failure.

Video of the performance showed Darnell’s truck outpacing one of the airplanes overhead and about to overtake another when his truck caught fire and appeared to roll. Darnell Motorsports owner and co-driver Neal Darnell, also father of Chris, attributed his son’s crash to a mechanical failure, he said in a Facebook post that evening.

In a new interview on Monday (July 4), Neal revealed that it had been determined that a blown tire was to blame for the accident. When the tire blew, it ruptured a fuel tank which led to an explosion that caused the truck to roll.

In a post shared to his personal social media pages, Neal thanked fans for the outpouring of support.

“Literally thousands of you have reached out. We wish we could personally answer every single one. We have lost our youngest son Chris in an accident doing what he loved; performing with SHOCKWAVE. Chris so loved life and his huge Air Show and Drag Racing Family,” the post read.

Neal added that Chris and his wife had recently completed a 2-year dream home project, and were “set for life.” He also shared that Chris had much to live for.

Neal, his wife Marilyn, and Chris’s widow and daughters, Reese and Taylor, traveled to Michigan to be together and “try our best to get through this.” 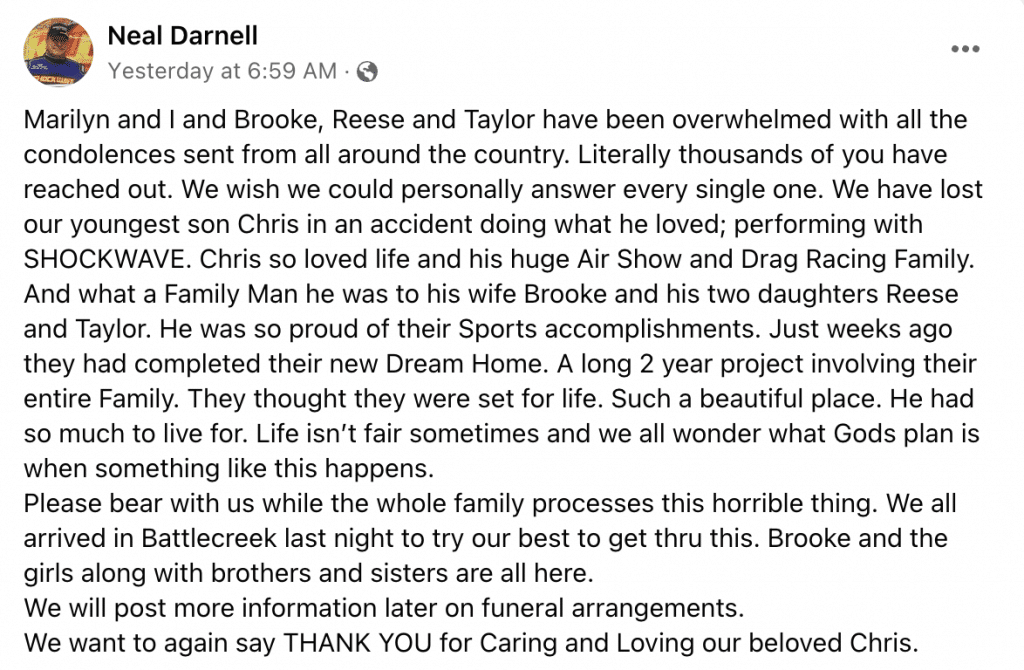 Funeral arrangements are pending. Our thoughts and prayers are with Chris Darnell’s family and friends.