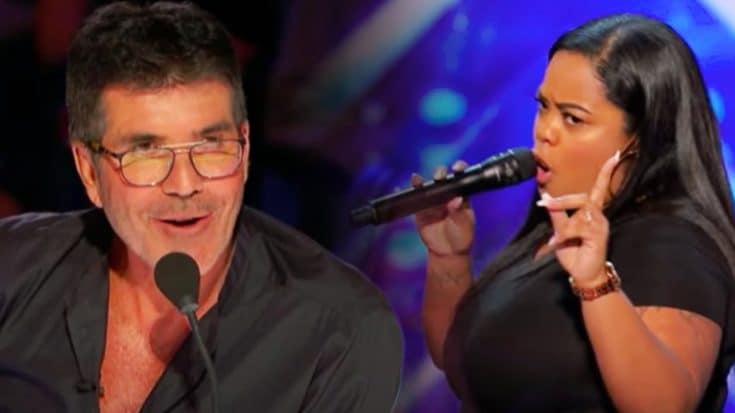 Shaquira McGrath has always enjoyed singing. She sings everywhere she goes, and even performs for the people she takes care of while working as a server at the Atlanta Braves’ stadium, Truist Park.

But McGrath has often been told that even though she is a good singer, things about her physical appearance need to change in order for her to “make it.” People have told her she needs to be a little bit thinner or a little bit taller if she wants to have a successful singing career.

McGrath finally gathered the courage to chase her dreams, and auditioned for America’s Got Talent. The AGT judges were quick to dismiss her naysayers when she appeared in front of them and shared her story.

From there, McGrath moved in to singing Gretchen Wilson‘s “Redneck Woman.” Released in 2004, “Redneck Woman” was Wilson’s debut single and first #1 song.

“Redneck Woman” is all about being proud of who you are, no matter what other people may say. It was the perfect song for McGrath to sing, since so many people tried to tear her down whenever she spoke about her hopes and dreams.

It was also the perfect song for McGrath because it gave her the chance to show off her extensive range. Every time the camera flashed to the judges’ faces, you could tell they were impressed by her sound.

Simon Cowell made his feelings about McGrath’s performance crystal clear when he spoke at the end of her audition. He praised her, saying she has a “Great, great voice.”

The notoriously critical judge had nothing but compliments to share with McGrath. “This is just the beginning for you, I think there’s so much more,” he told her. He later went on to say, “I loved that audition.”

In the end, all of the judges voted “yes” and sent McGrath through to the next phase of the competition. Tune in to the video below to watch her knock everyone’s socks off with her performance of “Redneck Woman.”