By Miranda Raye on March 26, 2019
Advertisement 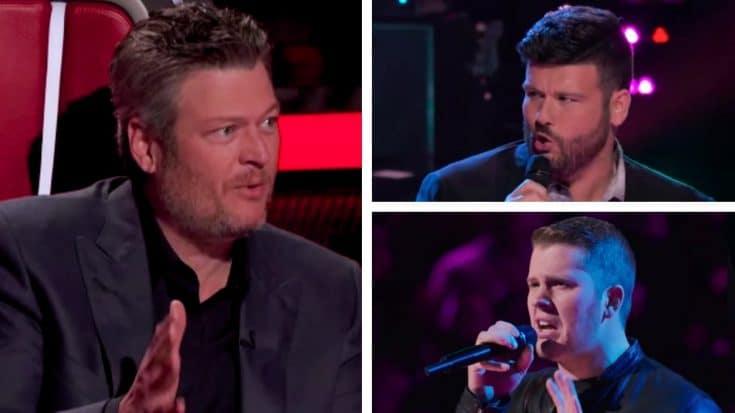 The Voice Battles Keep Getting Better

There’s a reason why fans of The Voice love watching the battle rounds. It’s the time when some of the season’s best performances emerge, as two talented artists showcase their talents through a duet to a popular song.

Over the years we’ve seen plenty of awesome battles, with many of them being country themed. Take Dave Fenley and Keith Paluso’s performance below as a prime example of such a battle.

But Season 16 may have aired one of the best country Voice battles in history, featuring singers Gyth Rigdon and Rod Stokes.

The duo performed a modern hit by up-and-coming artist Mitchell Tenpenny. The song, called “Drunk Me,” was released as Tenpenny’s debut single and reached the second spot on the U.S. Country Airplay chart.

It’s an ideal song to battle to, as it has the narrator dealing with the aftermath of a failed relationship by drinking to numb the pain.

A song with such intense emotions needs a voice (or voices) behind it that can bring those emotions out in full force. Within seconds of their battle performance, Rigdon and Stokes made it clear they have those exact voices.

A Tough Choice Leads To A Steal

The two traded lines throughout the song, with each new trade prompting a wowed reaction from the coaches. You could tell by watching the way they responded that this battle was going to be anyone’s game.

When the intense performance ended and it came time for the coaches to offer up their advice to the duo’s coach, Blake Shelton, the consensus was mixed. Kelly Clarkson and Adam Levine were in love with Stokes’ gritty tone and outlaw sound, whereas John Legend found himself enchanted by Rigdon.

Shelton struggled over who he should choose as the winner, saying that the choice between the two singers was “impossible” for him to make. He finally made a decision, and decided he wanted to keep Rigdon on his team.

But just when it seemed like Stokes would be sent packing, Levine jumped in and used his one and only steal to bring the singer onto his team. We’re not gonna lie, we totally expected a steal coming out of that battle, because both singers were too talented to send either one of them home.

The coaches weren’t the only ones that Rigdon and Stokes impressed with their performance. Tenpenny happened to see the battle when it aired, and made it clear he was a huge fan of the singers’ rendition of his song.

“Well d— this is cool,” he wrote on Twitter.

We agree with Tenpenny, this is one cool country battle that you can’t miss out on watching.

Be sure to check it out in the video below, and let us know if you think Shelton chose the correct person as the winner!