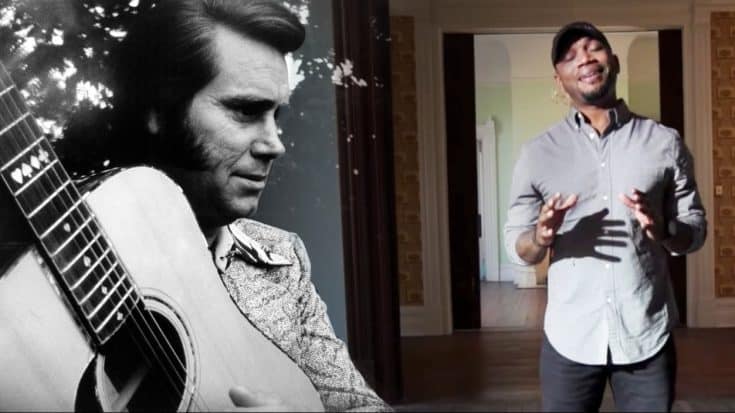 To this day, George Jones is one of the most iconic country musicians of all time. As a result, covering a song by The Possum can be intimidating. Luckily, Tony Jackson was up for the challenge. In his tribute to George Jones, Jackson walks through an eerily empty house as he performs the hit classic, “Grand Tour.”

Jones released the song in 1974 and it reached the top of the U.S. Billboard Hot Country Singles chart. While the song itself was incredibly successful – the meaning behind it was about failed marriage and lost love.

The song was deeply personal for Jones when he first sang it, as his own marriage to fellow country star, Tammy Wynette, was nearing its end. Within a year of its release, Jones had split from his wife. Oddly enough, Wynette later married George Richey, who co-wrote “The Grand Tour.”

The song starts off with sorrowful foreshadowing that sends chills down your spine. Jones invited us into his broken home saying, “Step right up, come on in/ If you’d like to take the grand tour/ Of a lonely house that once was home sweet home.” The song continues to tell the story of each room – now haunted by happy memories of the past.

Music News
Today In 1974: George Jones sat in the #1 spot on the Country songs chart with "The Grand Tour".https://t.co/jleyntDzao

Jones’ bellowing, sorrowful voice added an element of true pain to the song when he sang. Now, Tony Jackson pays tribute to George Jones by bringing his own deep, rugged sound to the country classic. His gloomy video tugs at your heartstrings as he walks through an empty house that was once filled with love and laughter.

So grab a box of tissues and check out the full video below.