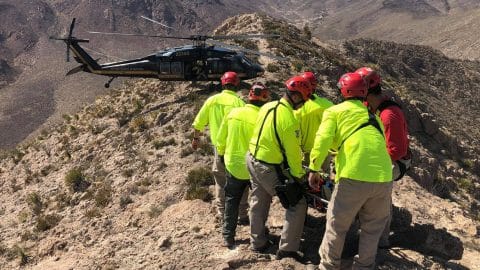 An injured hiker who was unable to walk had to be airlifted out of McKelligon Canyon outside of El Paso, Texas on Sunday, April 4, 2021. According to kvia news, the rescue operation consisted of 16 firefighters, one of whom suffered a snakebite during the rescue.

The 48-year-old injured woman, whose name was not released, had been hiking that afternoon in the canyon when she sustained an injury to her left knee and called 911 for help.

The El Paso Fire Department Search and Rescue Team located the woman on the ridgeline west of the canyon summit and requested a Blackhawk helicopter from the U.S. Border Patrol, which flew her out of the canyon to the W.H. Beaumont Army Hospital where she was transferred to an awaiting ambulance.

The El Paso Fire Department tweeted photos of the operation and captioned: “Crews located and evaluated the patient and USCBP Air and Marine Ops crews airlifted her back to safety. Special thanks to Air and Marine Ops for always having our back.”

Yesterday, #EPFD #COMSAR crews assisted an injured hiker at the Sugarloaf Mtn Trail. Crews located and evaluated the patient and USCBP Air and Marine Ops crews airlifted her back to safety.

Special thanks to Air and Marine Ops for always having our back!!

The snakebite victim was treated at University Medical Center in El Paso and has since been released. It was not clear if the snake was venomous.

According to the Texas Parks and Wildlife’s website, the state is home to over 105 species of snake, with 10 of those being variations of the rattlesnake, in addition to the copperhead, cottonmouth, and coral snake.

For information on what to do in the event of a snakebite, watch the video below.