Snake Slithers Onto Man’s Windshield, Uses Wipers To Launch It Off

By Manly Bryant on July 1, 2019
Advertisement 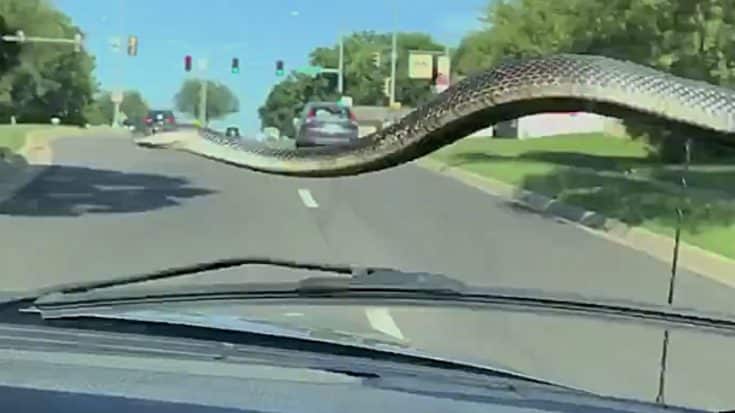 Chris Henderson from Kansas City posted a video to Twitter showing a massive snake slithering around his windshield and his dad using the windshield wipers to knock it off the truck!

Warning: The video includes the use of language some may find inappropriate.

So this happened today ? pic.twitter.com/ARLSr5NtQ2

Apparently, the snake was in the bed of the truck when they pulled out onto the road and didn’t realize it until the snake started slithering past the passenger’s side window. You can hear Chris while he’s filming in the passenger seat light up with excitement as he starts recording.

Entertained By The Snake

The two of them, entertained by the snake, kept driving while it continued to slither around looking for a way to get off the moving vehicle. It started from the passenger side window and wrapped itself around the side mirror looking over the front windshield on where to go next.

Eventually, the snake slithered onto the windshield and Chris’ dad turned the wipers on, and it catapulted the snake onto the other wipers that then flung it off the truck. They both broke out into laughter and the video cut off.

Even though most will get a chuckle out of the video, we hope the snake was okay! If this ever happens to you, we recommend you pull over and let it safely slither off your vehicle so it doesn’t get hurt.