Snake Slithers Through Woman’s Earlobe Hole And Gets Stuck

By Manly Bryant on July 2, 2019
Advertisement 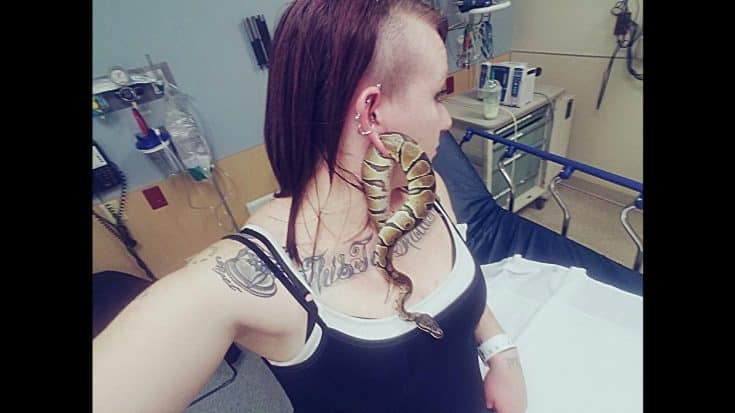 Ashley Canaday from Portland, Oregon owns a small friendly ball python named Bart who found her gauged ear piercing to be a hole he’d like to slither through. That is until he got stuck!

According to Ashley’s Facebook post, Bart was wrapped around her shoulder sitting like he normally does when he slithered up to her gauged hole in her ear and stuck his head through.

“It all happened SO fast that before I even knew what was going on it was already too late,” she wrote on Facebook.

she thought he was attacking her

At first, she said she thought he was attacking the side of her face but when she realized he had gone through her ear and tried to get him out, he had already slithered half his body through. She didn’t want to hurt or damage his scales so she did the right thing, she went to the emergency room to get him safely removed.

How Was The Snake Stuck?

Thankfully Bart was removed and everybody went home happy. However, not before her friend took a picture of them. Once she posted the picture to Facebook it went viral! The post currently has 24 thousand likes and 33 thousand shares.

The story was so viral it ended up getting put into the Ripley’s Believe It Or Not book!

This is a rare situation for anybody to be in and we’re just glad no one got hurt. After it was all said and done, she gave an update on her situation to let everyone know it was all good.

“Yeah. Scared the s*** out of me and was REALLY worried about HIM but everything worked out…” she wrote.

Watch the video below for more details.