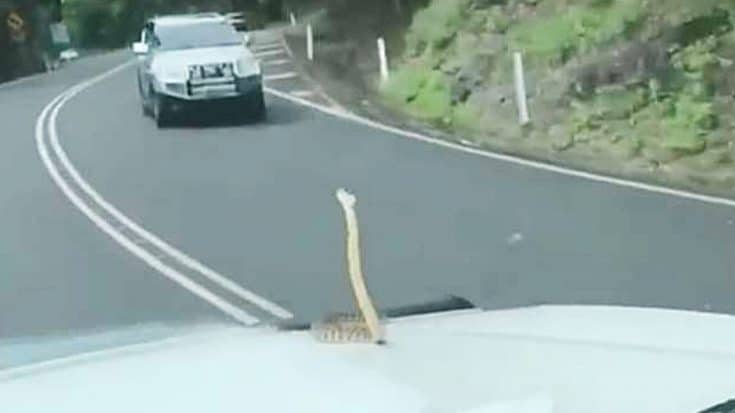 After an amazing weekend of camping at Granite Gorge Nature Park in Australia, Rebecca Mills, and her family were all packed up and pulling out of the park to go home.

All of a sudden, they noticed they had a hitchhiker traveling with them which appeared to be a three or four-foot tree snake. You can hear when the video comes on that Rebecca’s daughter is laughing as the snake slithers onto the hood of the car.

The family just kept driving and the snake continued to slither around, raising up its head as cars passed. At one point the dad who was driving joked, “He’s our pet now.” Rebecca, in the passenger seat, added on, “Baby, stop so it can get off.” Their daughter in the backseat was laughing and said, “Just keep going it’ll come off.”

Everyone Makes It Home Safely

They eventually slow down to the side of the road and stop the car and the snake slithered even closer to the windshield. It wasn’t until David got out of the car to grab a stick to remove it that the snake started making its way off the car hood.

The snake made it safely into the forest and the family was able to travel home safely.