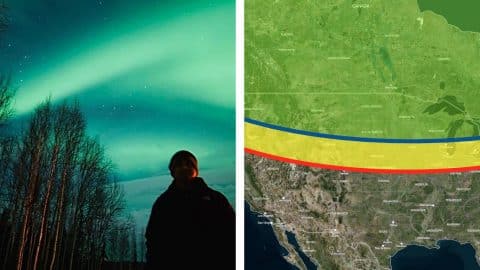 A beautiful sight in the night sky is going to be visible tomorrow evening – and remain there for two full days…but it’s not just any sort of celestial event. An alert for a geomagnetic storm over North America has been issued by some of the world’s foremost experts in natural events, and this is sure to be one of the coolest you will ever see.

Camping under the northern lights pic.twitter.com/VbUv71Tk2m

Beginning tomorrow (May 16th, 2019) and continuing for about 48 hours, many parts of the United States and Canada will be able to witness one of nature’s most-impressive phenomenons: the Aurora Borealis.

Also called The Northern Lights, this isn’t the first time us Americans will be able to see this ultra cool phenomenon outside of the North Pole – it actually happened again just a few months ago!

The National Oceanic and Atmospheric Administration issued an alert in March for a “moderate” geomagnetic storm to occur on the 23rd, due to the arrival of an anticipated CME (coronal mass ejection).

This agency posted a map along with several photos of the predicted event on their official website. Alongside the images, they explained that this event was the result of an “asymmetric halo CME” that is partially directed at Earth.

“The largest storms that result from these conditions are associated with solar coronal mass ejections where a billion tons or so of plasma from the sun, with its embedded magnetic field, arrives at Earth,” NOAA writes.“CMEs typically take several days to arrive at Earth, but have been observed, for some of the most intense storms, to arrive in as short as 18 hours.”

Now, a similar event is happening again – but will be visible in many more states.

One of the worst solar storms to ever occur happened in 1859 and is commonly known as The Carrington Event – after the famous scientist who observed the entire thing and made the link between what he observed and the crazy stuff happening in the world.

During The Carrington Event, many people saw the actual telegraph wires explode into flames – and if something similar happened to us today, it would mean disaster for our technology-based world.

This beautiful spectacle should be visible in some of the northernmost states and will become fainter as it is seen in middle states, but will be not visible in the majority of the Southern states.

States like Washington, Montana, Minnesota, Michigan, New York, and most of the New England states will get the best view, but other states like Oregon, Idaho, Wyoming, North Dakota, South Dakota, Illinois, Ohio, Nebraska, Pennsylvania, Kentucky, West Virginia, and the northern part of Virginia will have points to see the event as well.

The map above depicts where NOAA expects folks to witness these beautiful lights dancing across the sky and it will fall between the green and yellow lines.

Every single year, millions of people travel to parts of the globe closest to the North Pole in hopes of witnessing the Aurora Borealis (Northern Lights) – but this weekend you might be able to see it right in your backyard!

Check out NASA’s cool video about Solar Flares and CMEs below and let us know if you’ll be heading outdoors for this solar event in the comments below.