Soulful Park Ranger Forces Blake Shelton To Use One & Only ‘Block’

By Jennifer Pernicano on September 26, 2018
Advertisement 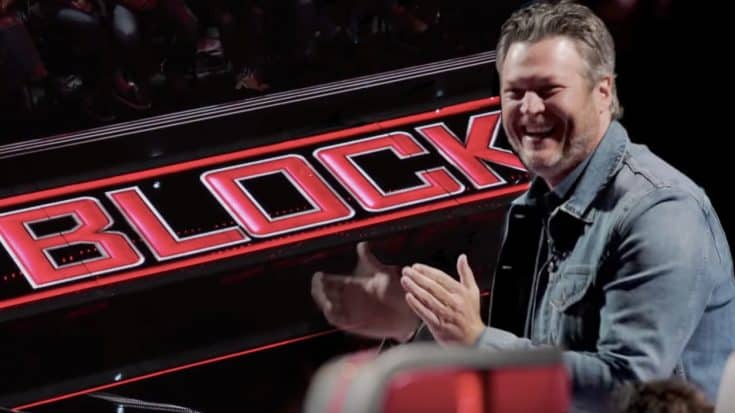 Who knew that a Park Ranger from Memphis, Tennessee could be what got between Blake Shelton and Adam Levine‘s bromance?!

During Tuesday night’s (Sep 25) episode of The Voice, a man by the name of Keith Paluso delivered a soulful version of Kaleo’s song “Way Down We Go.” Kaleo is a blues/rock band from Iceland, and have had incredible success in the United Stated with their Platinum-selling single “Way Down We Go” and a Grammy nomination in 2017 for the song “No Good.”

Not only did he blow the audience away with his incredible talent, he won over all the coaches, although only Shelton and Levine turned for him. From the second Paluso started singing, you could see Shelton try to figure out his strategy. He had to decide between pressing his button for the Tennessee-native, or use his “Block” button, which would prevent another coach from getting the singer – should they turn.

It’s a risky move, seeing as you never know for sure what the other coaches are thinking, but Shelton decided to go ahead and “Block” Levine!

Throughout the audition, Shelton was looking a little worried that he wasted his “Block” because Levine wasn’t turning, but at the last second, he did and Shelton got to relish in it! At first, the “I’ll Name The Dogs” singer tried to deny it, but since no other coaches turned, he couldn’t blame it on anyone else and had to fess up.

After finding out what Paluso did for a living, Shelton said, “In high school, I always dreaded seeing the Park Rangers come around.”

Clarkson chimed in, asking him, “Why Blake? What were you doing?”

“I had a big cooler of beer, Kelly Clarkson!” he replied.

After he acquired Paluso, Shelton sent out the following tweet.

hey y’all.. I finally got the Park Ranger hook up. so definitely won’t get busted @kelly_clarkson is bringing the beer. #voicepremiere

Clarkson promised Paluso that if Shelton was stupid and dropped him from his team at any point, she’d steal him – so it’s safe to say he will be around in the competition for a while!

Watch his full audition below.