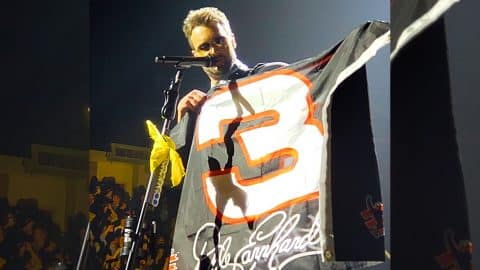 Just barely more than 18 years since the world lost this one-of-a-kind racer, fellow North Carolina native Eric Church took to the stage in their home state for an unexpected tribute that had every single person cheering!

Often regarded as one of the most notable people to ever set foot on one of NASCAR’s tracks, this beloved racer was a huge part of life in the South and a figure many admired…

For the last several years of his career, Dale would get a Bible verse from Darrell Waltrip's wife Stevie to put in his car. This clip here is prior to the 1999 Daytona 500 #DaleEarnhardt #NASCAR #Daytona500

Church, who is currently traveling around the country on his Double Down Tour in support of his chart-topping album, Desperate Man, stopped over in Greensboro, North Carolina for a show in his home state.

Hitting the stage for just one of a two-night stop, Church has been using a format that features different shows on each night so that fans can get a totally different experience – especially if they want to “double down” on their tickets.

During the first show on Friday night (March 15th), Church was a few verses into his 2014 hit “Talladega” when he surprised the entire coliseum with a tribute to the late racing legend that was so good – even Dale Jr. had something to say about it!

Dad would love this. All his fans and family certainly appreciate the respect @ericchurch https://t.co/VvYVUqzUVu

“Dad would love this,” Dale Jr. wrote on Twitter. “All his fans and family certainly appreciate the respect @EricChurch.”

In the middle of his song, Eric Church unfurled a giant flag featuring Dale Earnhardt Sr.’s famous car number three and his signature below.

Holding it high while still singing “Talladega” you could hear the incredible cheering just burst out from the stands as everyone caught a glimpse of this wonderful honor.