By Manly Bryant on April 29, 2019
Advertisement 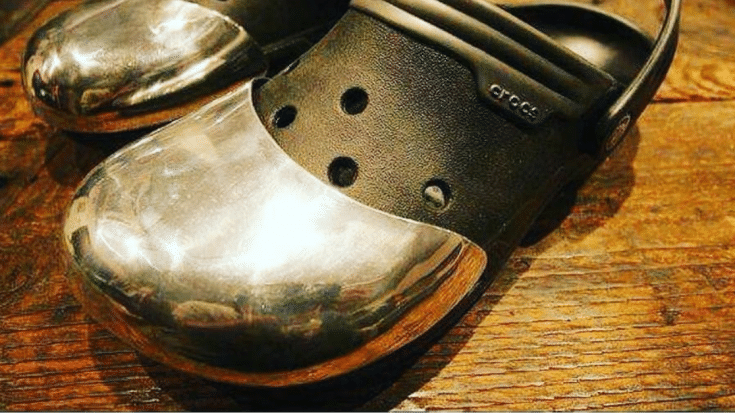 According to WCHX 105.5FM Radio, a man was seen selling a pair of hand made steel-toed Crocs on Facebook Marketplace for $200. We couldn’t believe it either, but it’s very real. Take a look.

The Shoes Are Real

First of all, despite Crocs being some of the most goofy looking shoes in the world, they are certainly one of the most comfortable shoes ever created. This leads us to assume that one man didn’t want to give up his comfortability for his new job, so this happened. He posted on Facebook Marketplace that the shoes are:

Story Behind The Shoes

Anyone reading would probably assume his boss told him to wear steel-toed shoes to his first day on the job, and he showed up wearing these funky looking inventions. He either really didn’t care about that job or he simply wasn’t willing to compromise on not wearing his favorite, most comfortable shoes.

No one really knows the true story behind this but when left up to imagination, one can only think that he grabbed some metal, glue, and his Crocs to create this practical piece of art: a mind-blowing, eye-catching, steel-toed Croc shoe that would both fit his job qualifications and his personal preferences.

Clearly it didn’t work out for him because he instantly put an ad up selling them on Facebook Marketplace for an insane amount. Some people (including us) couldn’t believe how much attention these bad boys were getting while others started making even crazier steel-toed Crocs.

The shoes were so out-of-the-box and funny that over 65 thousand people shared a meme created after them.

The power of the Crocs are apparently very strong. Moral of the story: if you don’t care about your job and you require steel-toed shoes, there then jerry-rig yourself some steel-toed Crocs together.