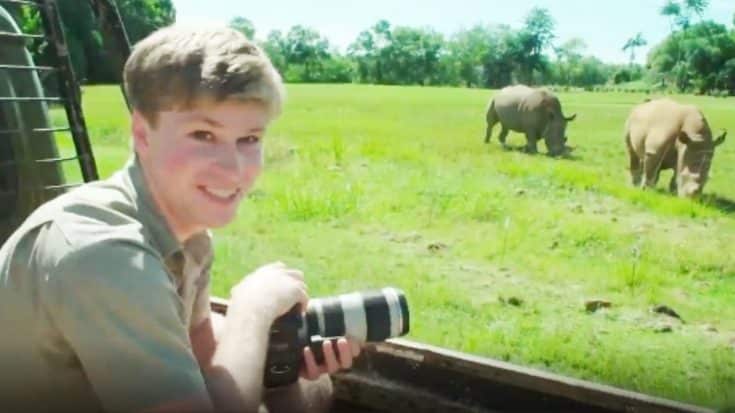 Although Steve is no longer with us, his passion for wildlife lives on through his wife, Terri, and his children, Robert and Bindi.

The trio is now carrying on Steve’s legacy through a new television series, Crikey! It’s the Irwins.

‘Crikey! It’s The Irwins!’
I am so happy to announce that our brand new Animal Planet series will be airing on October 28th. ?? We can’t wait to share our story with you as we continue Dad’s important work. This feels like a beautiful new life chapter. I hope to see you there. pic.twitter.com/RUPe1taXk1

Fans have come to know Robert through the years thanks to his frequent appearance on The Tonight Show Starring Jimmy Fallon.

Every time Robert visits, he brings a bunch of animal friends along to meet Jimmy. The TV host has some pretty priceless reactions upon meeting some of the critters that Robert brings on the show.

Whenever he finds spare time, Robert devotes himself to another passion of his…photography. He combines that passion with his love for animals, and takes some breathtaking pictures of wildlife around the world.

In fact, Robert’s photographs are so outstanding that he has actually won awards for them. According to his website, he is also the leading photography contributor to the Australia Zoo’s Crikey magazine.

To recognize Robert’s outstanding talent, we’ve gathered a batch of some of his most beautiful photos here for you to admire. Go ahead and take a look at the stunning shots below.

In this picture, Robert captured a bunch of birds mid-flight, resulting in a gorgeous image. Can you spot the hidden coyote in the grass?

One of the most beautiful birds I’ve ever photographed, the tufted puffin!

Here’s an image from way back when, taken on one of my first trips to Africa… Zebras have always been one of my favourite animals to photograph. That mesmerising striped pattern is unique to every individual!

Robert took this photo during one of his first trips to Africa, and it’s a striking sight. He said that zebras have always been a favorite photography subject of his because of their unique stripes.

It’s photos like this that make standing in dark and cold for hours SO worth it! With no towns or cities nearby, the stars at our conservation property in western Queensland are incredibly bright!

No animals to be seen in this photo, but it still showcases raw, natural beauty. Robert said he stood in the “dark and cold for hours” in order to get this finished shot of the night sky in Queensland.

Flashback to swimming with this gnarly old loggerhead sea turtle! Covered in algea with a huge chunk out of his shell and a head that was way bigger than mine. Was pretty awesome spending time with him @ladyelliotislandecoresort on #GreatBarrierReef ?

Robert’s talents also extend to the sea! He took this amazing shot of a loggerhead sea turtle while swimming near the Great Barrier Reef.

Scored with this awesome sighting! A coyote dusted with snow running across a frozen lake in Southern Oregon ❄️ #flashback

Robert snapped this snowy shot of a coyote during a visit to the States. He was in southern Oregon at the time, and it was a gorgeous winter day.

Found a very chubby New Holland frog! These cute little guys are burrowers and are usually more active after rain, and sure enough after a light shower, we spotted him hopping across the road! #OutbackQueensland

Check out that closeup shot! This little critter is a New Holland frog, which Robert said he spotted “hopping across the road” in the Australian Outback.

The iconic Cradle Mountain and Dove Lake in Tasmania’s remote wilderness. One of the more difficult and cold night shoots I’ve done, but SO worth it! #DiscoverTasmania

Just look at the colors! Robert took this stunning nighttime shot in the remote wilderness of Tasmania. Once again, he had to deal with a “difficult and cold night,” but said the resulting shot was “SO worth it!”

Robert wouldn’t be a true Australian photographer if he didn’t have some pictures of kangaroos to share. He posted this stunning snapshot after photographing a pair of kangaroos at sunset.

I really enjoy capturing the loving bond between lionesses and their cubs. I love showing the other side of predators like lions. They may be honed hunters, but they are also so caring and affectionate. #SouthAfrica

Robert said he loved this photo he took of a mama lion with one of her cubs, because it shows the “other side” to a creature we regard as a fierce predator. There’s no denying that it’s an adorable picture!

Just finished another fantastic photography expedition in South Africa. Looking forward to sharing a few of my favourite shots, stay tuned! This is a stunning female leopard resting in a tree ? #SouthAfrica

Speaking of big cats, Robert also shared this jaw-dropping photo of a female leopard he came across in South Africa. Looks like she made a good model!

It was a lot of fun getting this photo of a particularly enthusiastic carpet python for #WorldSnakeDay ? He certainly looks excited! ?

Robert managed to snap this shot of a carpet python at just the right time. It was poised and ready to strike, though Robert jokingly said the slithery critter was “enthusiastic.”

These wild lion cubs are so hilarious! I couldn’t help but laugh when photographing all of the antics and expressions of these adorable animals! ? #WildlifeOfAfrica #SouthAfrica

This has to be one of Robert’s more comical photos, since it captures the funny personalities of some adorable lion cubs. “I couldn’t help but laugh when photographing all of the antics and expressions…” Robert wrote about the cubs.

An experience with an elephant always takes your breath away. I loved photographing this spectacular matriarch having a dust bath in #SouthAfrica

In the caption to this photo, Robert wrote that “an experience with an elephant always takes your breath away.” This photo he took of a female elephant in South Africa certainly left us breathless!

It was such an amazing experience to photograph the bald eagle migration in Oregon in the US early this year! This photo shows a pair of eagles feeding on a tundra swan. ? #baldeagle

Robert took this incredible photograph of two bald eagles feeding on a tundra swan during another one of his visits to Oregon. He even caught their reflection in the water!

This image has been selected as Highly Commended in Wildlife Photographer of The Year Awards, the most prestigious photography competition in the world. So honoured! I spent a month visiting a remote swamp in northern Queensland to get this shot of a huntsman spider devouring a frog and was very excited that it is one of the only times this has been recorded. Watch for my image touring in the @nhm_wpy exhibition with the best nature photos of 2018. It will be in 60 museums in 6 continents.

This image is one of Robert’s most iconic shots. As he explains in the post above, it was selected as “Highly Commended in Wildlife Photographer of the Year Awards,” which is the most prestigious photography competition there is.

The shot depicts a huntsman spider as it captures a frog, a rare sight that few have witnessed. In fact, Robert explains that his photo marks “one of the only times this [action] has been recorded.”

You can listen to Robert tell the story behind this remarkable photograph by tuning in to the video below.

Want to keep up-to-date with Robert’s adventures and his new photographs? Then be sure to follow him on Instagram here.

If only Steve was here today…he’d be so proud of Robert and all he has accomplished.

Was so honoured for my work to be recognised in these incredible awards! #Repost @nhm_wpy ・・・ For our latest #WPYinsights film, young photographer and conservationist @robertirwinphotography shares the story behind his powerful picture, ‘The catch’, which captures a huntsman spider dangling in mid-air, tightly clutching its meal. There’s still time to see Robert’s image in the #WPY54 exhibition at the @natural_history_museum in London, which closes this Sunday. If you're keen to experience the beautiful winning images, check the link in our bio for availability and to secure your tickets. #WPY #WildlifePhotographerOfTheYear #WildlifePhotography #Nature #Wildlife #NaturePhotography #Nature #NaturePhotos #WildlifePhotographer #RobertIrwin #Queensland #SteveIrwinWildlifeReserve #PhotographyContest #Photography #PhotoOfTheDay #PicOfTheDay #Exhibition #London #NaturalHistoryMuseum #NaturalHistoryMuseumLondon